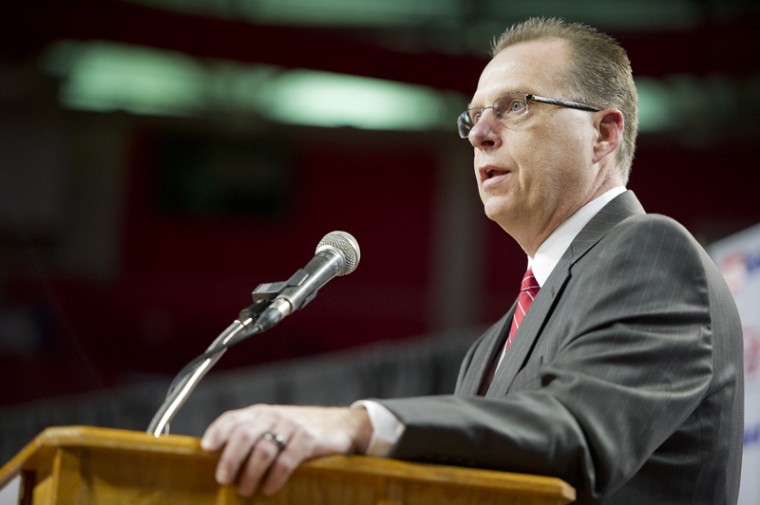 He laughed, joked a little bit, then rallied the jubilant Diddle Arena crowd. Then when the moment sank in, Ray Harper began to tear up.

As President Gary Ransdell put it, the Bremen native had completed a journey.

The former Kentucky Wesleyan College head coach, who grew up wanting to play for WKU, was right where he said he always wanted to be. With an introduction from the public address announcer and the band playing the fight song, Harper was officially introduced as WKU’s 14th head coach at a pep rally on Monday night in front of hundreds of cheering fans.

“We’re going to return this program to its championship stature, a place its been before and a place we’re going back to,” Harper said. The difference is once we get there, we’re not going anywhere.”

Harper took over as interim head coach on Jan. 6 after former coach Ken McDonald was fired. Since then, WKU has posted a 4-7 record, with home attendance higher than it has been all season. The four home games under Harper have accounted for the four highest home crowds this season.

Ransdell said the six weeks since Harper took over were an audition.

Still, Athletics Director Ross Bjork and Ransdell said they conducted a national search. It was a job that many people “coveted.”

But Bjork said he found his answer right under his nose.

“We analyzed a lot of information, but one man stood out,” Bjork said. “It became apparent who that later had to be and who that individual was to take us with a new voice. He was actually friendly, and he was familiar and he was right down the hall.”

As WKU’s season progressed and the losses began to mount, fans were clamoring for Harper to replace McDonald.

The fans saw a coach who had won at every level he had coached. In nine seasons at KWC Harper made the Panthers a perennial powerhouse in Division II and won two national championships along with five runner-up finishes.

Still, Harper’s resume drew the ire of some.

Harper was at the helm at KWC when several athletic programs were sanctioned by the NCAA and the school was cited for “lack of institutional control.” The NCAA found that two players from KWC’s 2002-2003 national runner-up team were ineligible, and the Panthers were forced to vacate their Great Lakes Valley Conference championship and their runner-up finish.

When Harper was named the interim coach, he acknowledged what happened while at KWC, but said anyone who has read the case understands the full dynamic of it, and added that he wasn’t concerned about it.

Bjork said he felt the same way, and that he looked at Harper simply as a winner.

On Monday, Bjork and Ransdell reiterated that sentiment.

Most of all, they saw the renewed excitement in the program.

“We observed the dedication,” Ransdell said. “We saw this arena become full again. We saw our students breathed energy into the program that we hadn’t seen for a couple years. We saw a renewed focus and a determination and a skill.”

Harper’s new contract will pay him $375,000 with incentives for academics, attendance and NCAA Tournament appearances that will take effect on April 1.

Harper said he plans to work hard to earn every penny of that by restoring WKU’s tradition-rich program.

“Our plan is to give you a basketball program that you could be proud of — that each time you watch them you’ll say ‘that’s my team,’” Harper said to the fans. “They play hard, they’re entertaining. But one thing we’ll say about them is that they’ve played as hard as they can play.