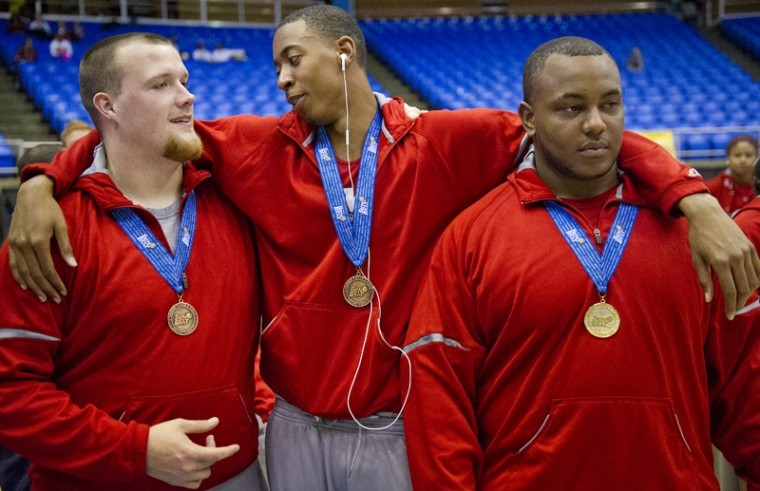 MURFREESBORO, Tenn. — In pre-meet polling for this weekend’s Sun Belt Conference Indoor Championships, league coaches predicted the WKU men’s track and field team would take it all — and the Toppers did just that.

The men brought in a total team ranking of 160.5, beating second-place school Middle Tennessee State by 59 points this weekend at the Murphy Center in Murfreesboro, Tenn. Members of the team said they found the competition easier than they expected.

“It was a massacre honestly,” sophomore sprinter De’Myco Winston said. “We scored what we needed to and points were put on the board as we just ran away with it.”

Winston competed in the men’s final 400-meter dash along with sophomore sprinter Marcus Winstead. They each earned all-Sun Belt honors as Winstead finished second in a time of 47.46 and Winston third with 47.73.

Distance runners David Mokone, Joseph Chebet and Peter Okwera kept the men on top on Sunday. The trio all ran the men’s mile and placed in the top three with Mokone first, Chebet second and Okwera third.

It was Mokone’s mile run of 4:10.08 that set a new Sun Belt Championship record.

Going into the championships, Head Coach Erik Jenkins that said if Mokone remained humble and hungry he would make for a better competitor during this year’s conference.

Mokone also earned top honors in the men’s 800-meters, and with his wins, said he was feeling quite good.

“You know I’m grateful and I can’t complain,” he said. “I won my mile, came in second in 800, and I can’t be too greedy because I’m happy and thrilled to be healthy… I finished strong, and I’m looking forward to the next race, doing faster than what I did today.”

The Lady Toppers finished fifth in the team rankings with a total score of 82.00. They finished behind league champion MTSU, North Texas, Florida International and Arkansas State.

In the women’s weight throw, senior throwers Monteka Flowers and Adesola Adeduro brought home wins. Flowers earned her second all-SBC honor with a runner up toss of 61-2.75, and Adeduro recorded her best throw of the year by finishing sixth at 58-7.50.

With this being her last time competing in the SBC indoor championship, Adeduro said her weight throw brought her joy for the end of the season.

Top honors for the night were awarded to two of WKU’s own, Mokone and Jenkins.

Mokone was honored as the men’s Most Outstanding Track Performer and Jenkins was named men’s SBC Indoor Coach, an honor he has received 13 times during his career.

Overall, Jenkins said he was proud of each team.

“I think we did a very good job of staying the course and executing,” Jenkins said. “The plan was obviously, of course, to win on both sides. The men did an outstanding job of competing at a very high level and the women did a good job…We have a lot of work to do on both sides in order to prepare for outdoors.”