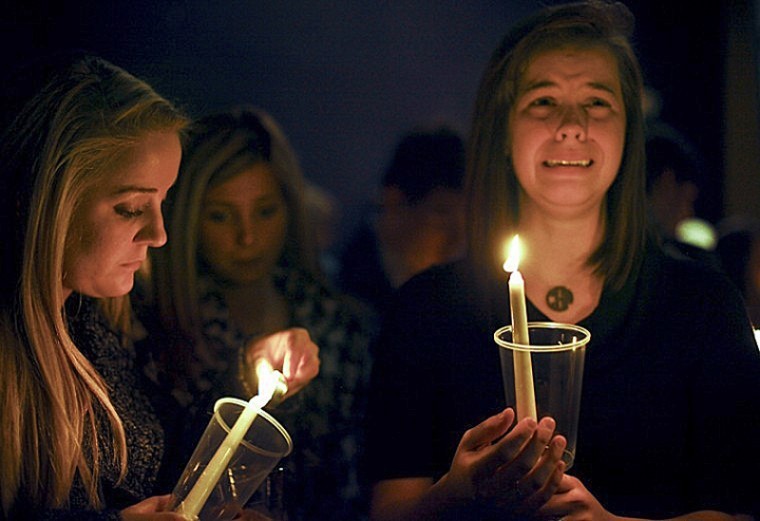 Bowling Green senior Caitlin Gover remembers her boyfriend Bradley Boling as someone who would do anything for his family and friends, “even if it put him out.”

“If we got in an argument, it didn’t matter if it was my fault — he’d make me laugh by the end,” she said.

The officer who arrived at the scene was responding to an overdose call at Boling’s residence, according to police reports, but Deputy Coroner John White said Boling’s cause of death won’t be known for six to eight weeks.

Bowling Green senior Kelley Purpus, who went to middle school and high school with Boling, called him “the most humble, sweetest all around good guy” she’d ever met.

“This is such a horrible situation, and I hope people remember Bradley for what he is and not how this has gone down,” she said.

About 100 people filled the SAE fraternity house for a candlelight vigil Friday night, sharing stories about their friend and brother.

Gover, who was among several people who spoke at the vigil, later said she and Boling shared many hobbies, including watching and critiquing movies together. He gave Gover her favorite movie, the 1980 comedy “The Blues Brothers,” as a present.

“He always gets excited about getting anyone gifts,” Gover said. “He got so excited to exchange Christmas presents we exchanged about a week early.”

“I was really looking forward to going to that because we hadn’t gone to a concert together yet,” she said.

She remembers him asking her, “Are you sure you like it?” over and over again after he gave her the tickets.

“He was like that with anybody — just always willing to give and not expecting much in return,” Gover said.

Although the pair grew up in Bowling Green, they didn’t officially start dating until about four months ago, she said. They both got jobs at Mariah’s restaurant in 2010 and slowly realized that they’d grown up in the same town, had many mutual friends and that their fathers even played tennis together.

“How do you go 20-some odd years without meeting someone in a small town like Bowling Green?” Gover said.

After the two began dating, she said they became inseparable.

“It’s just weird to think about how he would have graduated in May,” she said.

“He had so many bow ties. I remember him getting his Lilly Pulitzer tie, and he was so excited to show me,” she said. “One thing I never had to worry about — he always looked nice. His momma raised him right.”

Once, while Gover was busy with homework and couldn’t go out for the night, Boling asked her if it was OK if he could come over and tuck her in, Gover said.

“He came up for a bit and snuggled me, and that was it,” she said. “I said something goofy, and he just laughed and said he loved me — it was the first time he told me he loved me.”

Will Hoagland, Boling’s big brother in SAE, said Boling was one of the most genuine people he knew.

“I don’t think I ever saw Brad in a bad mood,” said Hoagland, a senior from Louisville and the Herald advertising manager. “Brad always had a smile on his face, and if you were having a bad day, Brad could easily make your day better.”

Hoagland said Boling was a very hard worker, great student and, most importantly, a great brother who looked after his friends and would drop anything to help them.

“I’d say the day he got initiated was a great memory,” Hoagland said. “After he was initiated, I gave him his SAE little brother paddle and gave him our official fraternity grip and told him how proud I was of him.

“He was so ecstatic to be a part of our organization that day, and knowing that he worked hard to earn it, I was glad I got to share that moment with him.”

Boling’s family declined to comment for this story, but his mother told a member of SAE to thank everyone at Friday’s vigil for their support.

Funeral services are at 11 a.m. today at First Christian Chruch. Cremation was chosen and Bradley’s ashes will be laid to rest at Chandler Memorial Chapel & Columbarium on campus at a later date.