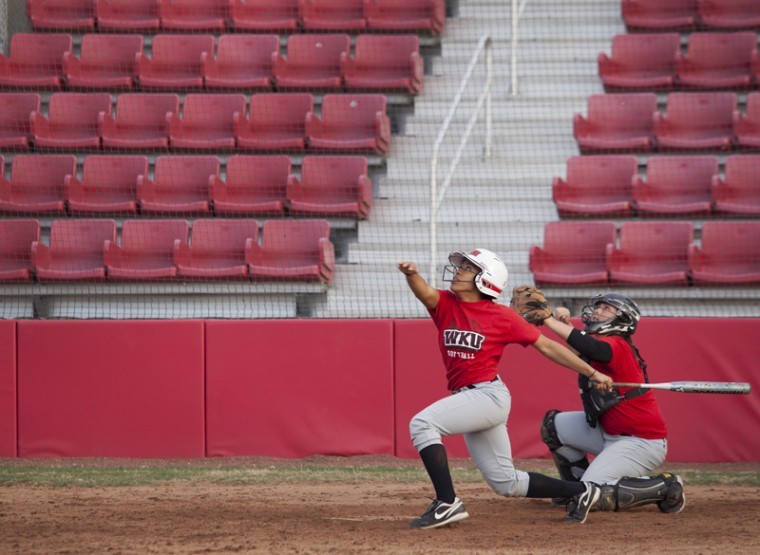 As the opening of the season draws closer, WKU’s softball team is looking to rely on an improved defense to become a strength.

Head Coach Tyra Perry said that during offseason practice, the defense is looking stronger than last season and gave part of the credit to new assistant coach Kirin Kumar.

Kumar, who previously coached at North Carolina, assisted with the infielders on a Tar Heel team that finished 34-21 and qualified for the Atlantic Coast Conference championship game.

“She runs the defense, so a lot of those transitions come from her knowledge and her background,” Perry said.

A key to the team’s defense this year will be field communication.

Perry pointed out that during Tuesday’s practice players were more vocal with runners on base than they were last season.

“There’s actually a chain of command,” she said. “You might hear one of them say ‘Runner on first, one out,’ and it kind of goes around the field.”

It wasn’t just Perry noticing the improvements on defense during practice.

Sophomore outfielder Kelsie Mattox said the infield in particular has made some positive changes since last season.

“Defensively, we are looking a lot better,” Mattox said. “We made some changes to our infield bunt defense.”

Another key to the team’s defense this year will be the pitching staff.

Junior pitcher Mallorie Sulaski led the staff last season with an ERA of 2.52 while posting a record of 13-12.

Though she made her biggest impact on the mound last season, Sulaski will be playing first base in addition to pitching in 2012.

She said she isn’t worried about her new defensive duties distracting her from pitching and said she is excited to have more at bats.

“It helps me in the sense that I can go and bat for my team, and if I gave up a run, I’m able to go and get it back,” Sulaski said.

The defense may still be a work in progress, but Perry said her players are confident in their ability to hit the ball.

“Last year, we were a good hitting team, so I would hope to see that continue,” Perry said. “We have a lot of young players that are clutch, and even though they’re young, they know how to come up with big hits.”

WKU opens its spring season at 9 a.m. on Feb. 10 against Cleveland State at the Palmetto Classic in Columbia, S.C.

Mattox gave praise to both the offense and the improved defense, and she said that the experience from last year should help with both aspects of the game.

“You can tell we’re definitely a year older,” she said. “We were pretty young last year.