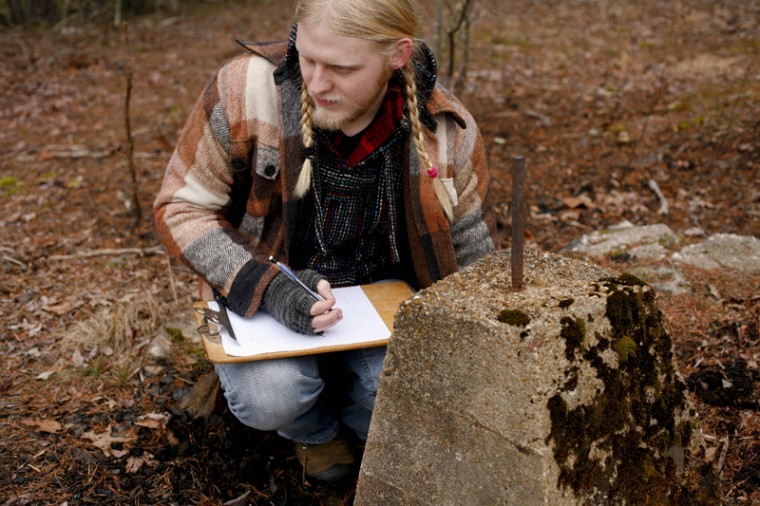 Senior anthropology major Jack LeSieur does field research in his hometown of Brownsville as part of his Anthropology Stewardship Class. His research includes mapping the remains of a church that was built in 1925, and his findings will be presented at the WKU Student Research Conference.

All learning is not done by simply sitting in a classroom.

LeSieur is an anthropology major and has been working on a historical archaeological project in Brownsville.

LeSieur is enrolled in an independent study class called Archaeological Stewardship, which allows him to do a research project under the direction of associate professor Darlene Applegate.

“I went to Dr. Applegate and told her about Kyrock, and she thought it sounded good,” he said. “Archaeology projects aren’t known about. Not a lot of people see them, but the point is to tell a story. It’s a lot of scientific work, but it’s all for a story that needs to be told.”

The only prior study completed in the area has been an oral project and a book published in 2010 called “Kyrock Kentucky.”

This is where LeSieur began his own research.

Along with studying information found at the Kentucky Building, LeSieur has also been to the area several times, with the permission of the property owners.

Brent Cardin, a 2010 WKU alumnus from Pulaski, Tenn., said his partner has been working on this project since September 2010.

“He gives his all to anything he holds dearly,” Cardin said.

LeSieur is a member of the Landmark Association of Bowling Green and has been able to preserve local landmarks such as the Reservoir Hill Pump House. LeSieur tries to preserve history and artifacts as he works at Kyrock. He said his ultimate goal is to preserve the story of the past.

“He is doing what he loves – preserving artifacts,” said LeSieur’s mother, Karen Lesieur.

He said he’s trying to nominate the land for the National Register of Historic Places and have a sign placed at the Edmonson County Courthouse. He said this will bring attention to a place that most people have forgotten about.

For most, Kyrock is just an old water tower that still remains on the property, LeSieur said.

Kyrock was built between 1917 and 1918 and was responsible for paving many roads in Kentucky, the United States and England, LeSieur said.

The company provided housing for its employees and even built a school and church.

LeSieur compared Kyrock to other mining companies that set up a living town for their employees and families, stating that the relationship between workers and the company was friendly.

Cardin said LeSieur is very passionate about this project.

“He has such personal ties to the area, and it’s the only place where he can do work no one else is doing,” Cardin said.

Since the company closed their doors in 1958, the area has been in a state of decline.

LeSieur said the Kyrock water tower has become a place that teenagers climb to see the woods that were once home to 2,000 people but now only have roughly 100 residents.

LeSieur will continue to work on this project into the spring semester and possibly even as a master project.