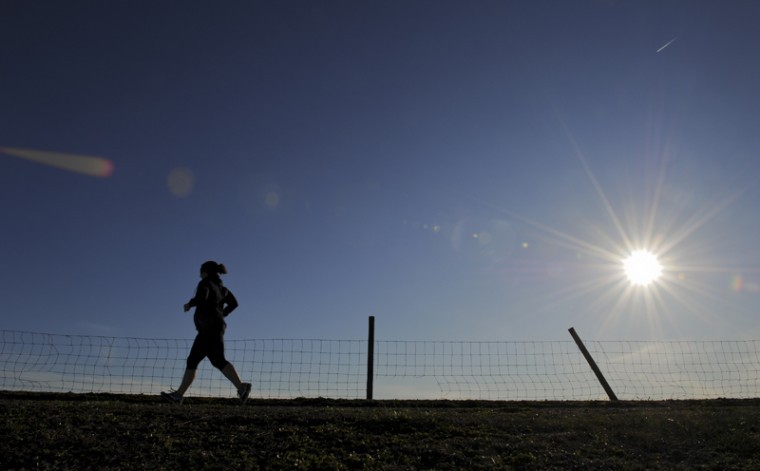 Tina Harris, a 2002 graduate of WKU, is training for a 50-mile trail race in Chattanooga next December. “I run first and foremost for my Lord,” Harris said. “It is Him that blessed me with chance to survive and recover from three preeclamptic pregnancies. Maybe through what I’m trying to do, a life can saved.”

She was healthy – an avid runner and fitness instructor, but preeclampsia showed no discrimination.

Preeclampsia is hypertension, or high blood pressure that only occurs during pregnancy and the postpartum period.

According to preeclampsia.org, the disorder can cause seizures, strokes, organ failure and death to the mother and baby.

“There are lots of babies that are lost from it,” Harris said.

Harris, 39, was able to manage the disorder during her following pregnancies with Salem, 4, and Paisley, 2.

However, the frightening effects still ring true as her 40th birthday approaches.

To Harris, 40 is just a number, and she wants to do something big to prove it.

“It’s not necessarily the top of the hill and downhill from there,” she said. “It can be just as good as any other age.”

In December, she will run the 50-Mile Ultra Trail Race in Chattanooga, Tenn.

She created a blog, “Momma’s Gonna Run 50,” documenting her journey leading up to the race.

Along the way, she plans to raise money for the Preeclampsia Foundation.

“I thought if I was going to do something big, I might as well do it for a cause,” Harris said.

She originally decided to raise money for breast cancer awareness but had a change of heart.

“My husband, Brandon, thought it would be a great foundation because not a lot of people knew about it,” she said.

Brandon, a WKU alumnus, said it was scary witnessing his wife and babies being affected by preeclampsia.

All three were born premature in order to avoid more severe effects of the disorder.

Brandon admits he wasn’t on board when she first mentioned the 50-mile Ultra.

“I was not for it,” he said. “I felt like the Ultra would be more than she expected.”

An ultra-race is much longer than a 26.2-mile marathon. It also forces runners to travel through different types of terrain.

Brandon also said he isn’t nervous for his wife, because she loves running.

“This race would be tough for anybody, but I think her desire is her greatest strength,” he said.

Tina is an aerobics coordinator and group fitness instructor at Total Fitness in Franklin.

“I love the way I feel when I’m fit,” she said. “I want to instill in my children how important it is to work out.”

Brandon said he can tell that it’s much more than a race for Tina.

“She wants to show them that we’re living a healthy lifestyle,” he said.

Nick Wheet, TRAX co-owner and physical therapist at Total Fitness, said he can tell that she really wants to give back to the community.

“She’s a good inspiration to all runners,” he said.

TRAX is outfitting Tina with proper running shoes and other gear.

They’re also helping her with training, nutrition and spreading the word.

The store will be selling shirts inspired by her blog, mommasgonnarun50.blogspot.com.

With the help of her family, friends and faith, Tina said she wants to raise as much money as she can for the foundation.