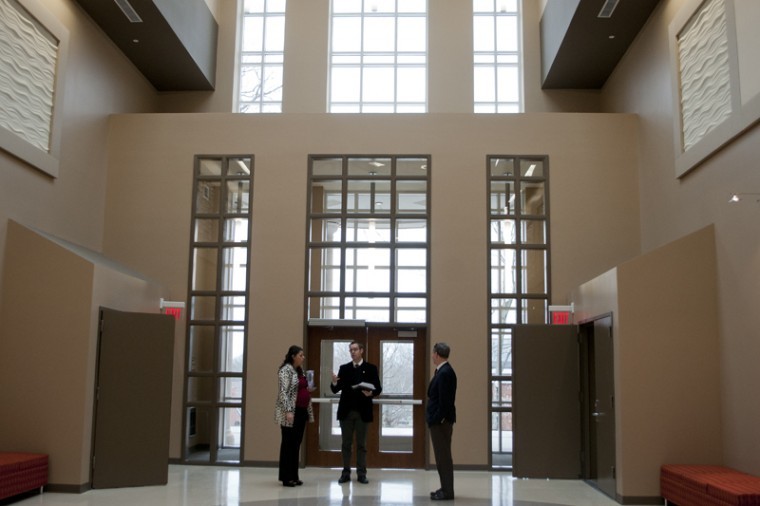 WKU Planning, Design & Construction project manager Kerra Ogden, the principal architect of the building firm Ross Tarrant Architects Jeff Stivers, and Dean of Potter College David Lee take a final walk through of the new Music Rehearsal Hall on campus and make plans to give a tour of the building to the Board of Regents.

The music rehearsal hall behind the fine arts center opened today in time for the beginning of the spring semester. Construction began on the project in August 2010.

The rehearsal hall will be used for instrumental and choral rehearsals and holds offices for conductors and other faculty, three performance music libraries and storage areas.

Mitzi Groom, head of the music department, said Thursday that everyone involved with the project worked harder to ensure that the building would be open for the spring semester.

“This week has been a whirlwind,” Groom said.

The building will be able to accommodate a growing program, she said.

“This has been a need that the department has had for a long time,” Groom said.

The opening of the music hall has allowed more classes to be available to students, she said.

“It opens up our schedule of classes tremendously,” Groom said.

The music hall will feature advanced audio and visual equipment, such as adjustable acoustic curtains, to simple upgrades like soundproofing, which are upgrades from spaces in FAC.

Band director Gary Schallert, is one of the faculty members that has moved over into the music hall. Schallert said the audio and video technology will aid in his teaching.

“These rooms are acoustically perfect — as close to perfect as you can get,” Schallert said.

The hall is at or above industry standards, he said.

“This is a state of the art facility that I think is going to be the envy of just about any music department in the region,” Schallert said. “We now have facilities that make us very competitive and allow us to rehearse like we should, at a college level.”

Cave City sophomore Jacob Sturgeon is one of the students who has rehearsed in the new music hall.

Sturgeon said he could hear the difference in the rehearsal hall and the area is more spacious.

“You don’t feel like you’re sitting on top of each other anymore,” he said.