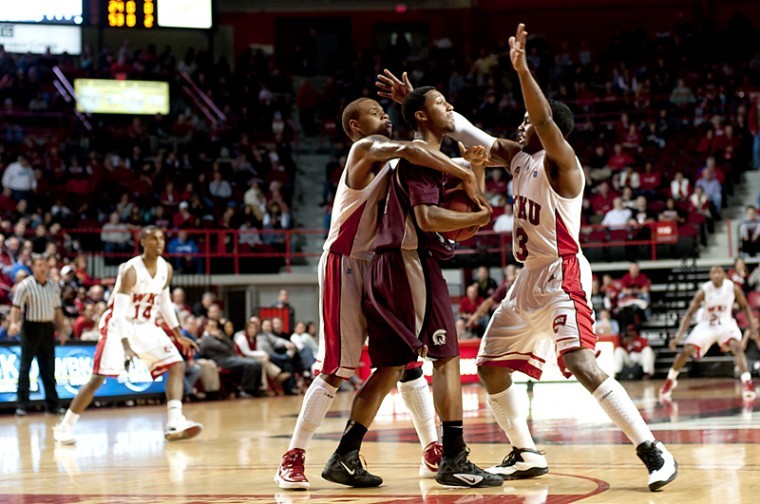 WKU’s interim head coach told media Thursday he geared the Toppers’ practices toward “trying to be able to sustain energy and effort for long periods of time.”

The extra conditioning and work was supposed to teach a team which had struggled in second halves all year how to be tough and to win late.

And the effects of that training paid off immediately.

The Toppers went on to win 65-53, snapping a five-game losing streak and clinching their first win since Harper replaced Ken McDonald on Jan. 6.

More often than not the Toppers have been on the other side of those second-half runs.

WKU’s losses earlier this season to Louisville, Florida International and Troy were all due in large part to opponents grabbing control of the game for five or six minutes of the second half and the Toppers not having enough of an answer to come back and win.

But Saturday it was WKU hanging tough and making the late statement.

The run started when junior guard Jamal Crook found McDonald open in the left corner for a wide open three-pointer, which he buried.

The Trojans then went one-shot-and-done.

McDonald pulled down the board, found Derrick Gordon streaking down the floor and hit the freshman guard in stride to assist a game-tying layup.

Then it was freshman forward George Fant’s turn to make a big play, jumping in a passing lane and starting a fast break which lead to a Crook layup.

Three more UALR one-and-done possessions were followed with shots hit by Crook, McDonald and Fant to give the Toppers an eight-point lead.

Meanwhile WKU played with a calm urgency, sticking with defensive assignments, crashing the boards and hitting shots while pushing the tempo and making a tired UALR team try to keep up.

Fant said the game’s final minutes were decided on toughness.

“Before the game we talked about toughness and how we were going to be the toughest team in the last six minutes of the game,” he said. “As you guys can see, we came out of it the tougher team.”

The former Louisville Ballard High School standout was WKU’s lone point guard option in the second half after his backup, freshman Kevin Kaspar, sprained his left knee right before halftime.

Out of need, Crook played 18 minutes in the second half, and made the most of them.

He finished with 13 points, five rebounds and four assists, playing the type of “quarterback” role Harper said he expects from his point guards.

Crook did so while fighting through the late-game wall of fatigue Harper is training his players to ignore.

“There were times where I wanted to give in and I was hoping coach would call a timeout, but you can’t always depend on that,” Crook said. “George mentioned toughness, and that’s just got to be our thing.”

The Toppers will need several shovels full of that toughness to climb out of the ditch in which they’ve dug.

With Saturday’s win WKU stands at just 2-5 in Sun Belt Conference play, and is on track to be one of the lower seeds for the league tournament in March.

But at least for now, Harper said his team has seen what it can do when it prepares in practice to play a 40 minute game.

“Hey, all this work we put in, it was worth it,” Harper said. “Winning is a lot more fun than losing, but there’s a price to be paid to win.”