COLUMN: Things were even worse than we thought with McDonald 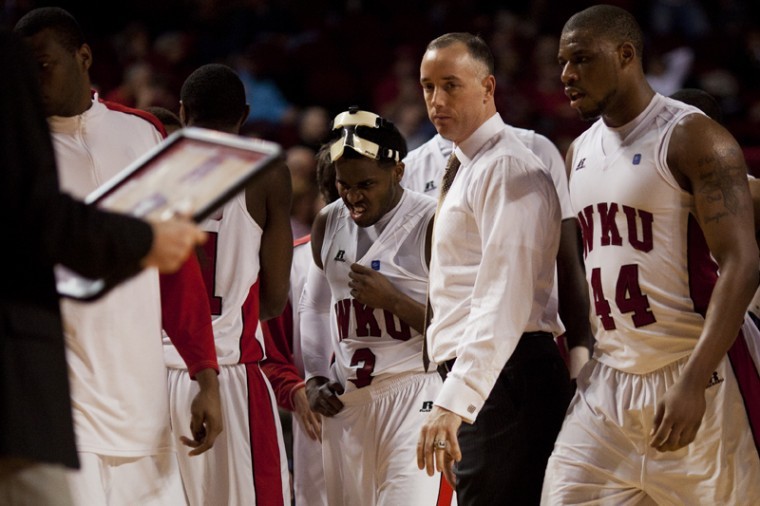 Former Head Coach Ken McDonald stands amongst his team during a timeout of his last game, against the University of Louisiana-Lafayette on Jan. 5, 2012. McDonald will be replaced with Ray Harper as head coach.

We all knew things in the WKU men’s basketball world were bad.

The team was 5-11, losing to the likes of Furman and IUPUI.

Attendance had dwindled to its lowest per-game average in the 49-season history of Diddle Arena.

And tickets to see the Toppers, one of the NCAA’s most historic teams, were being sold at local convenience store counters cheaper than the stores’ Snickers bars and Mountian Dew slushies.

Head Coach Ken McDonald’s fingerprints were all over the troubles of the program.

But you don’t realize the extent of how much an organization, like a basketball team, was affected by a key employee, like a head coach, until that coach is gone.

And judging by the atmosphere in the Diddle Arena media room Friday afternoon, things were even worse under McDonald than what we thought.

There was instead an almost celebratory feel to the audience.

Football head coach Willie Taggart and volleyball head coach Travis Hudson both dropped in to say hi to friends and watch the proceedings, as did golf coaches Ron Burchett and Phillip Hatchett.

Regents, boosters and other fans were shaking hands with one another and smiling.

Players sat at a table left of the podium, none of them sporting a depressed look on their faces one might expect after the firing of a coach.

The audience laughed when Harper turned to that group of players and told them to leave and get ready for practice.

The crowd chuckled again later when Harper told of his wife’s reaction to the 6-on-5 end of the Toppers’ loss to Louisiana-Lafayette the previous night.

Perhaps that says more than numbers ever could about McDonald’s effect on the WKU basketball program.

McDonald was a nice guy, always wiling to trade playful barbs with media members when the cameras were off.

His hire in 2008 was a reasonably smart one.

McDonald was a young guy that had been a part of successful teams, including several at WKU during an earlier stint as an assistant.

But the tension that built during the last year and a half of his tenure sucked the life out of the program.

The team wasn’t winning, lifetime WKU supporters were questioning the coach’s off-the-court life and the athletic department had given McDonald a six-figure pay cut to go along with a contract extension.

Question marks had taken the place of fun in the Topper basketball program.

He went on to say the players “were suffering in this environment” and that he saw “a pep in their body language” as Friday’s events unfolded.

While negative chatter from barbershops, water coolers and contributors to Hilltopper Haven message boards was directed at McDonald, the players were feeling the ill side effects of it too.

Suddenly they’re free of the distraction.

For the next two months they can simply go out and play basketball, not having to deal with rampant coaching rumors.

Expect a loose, floor-diving, fun-having basketball team over the next few weeks, starting at 4 p.m. Saturday against Troy.

And if WKU makes a run in its first few games under Ray Harper?

Then the more we’ll understand how much of a burden Ken McDonald was on this program.