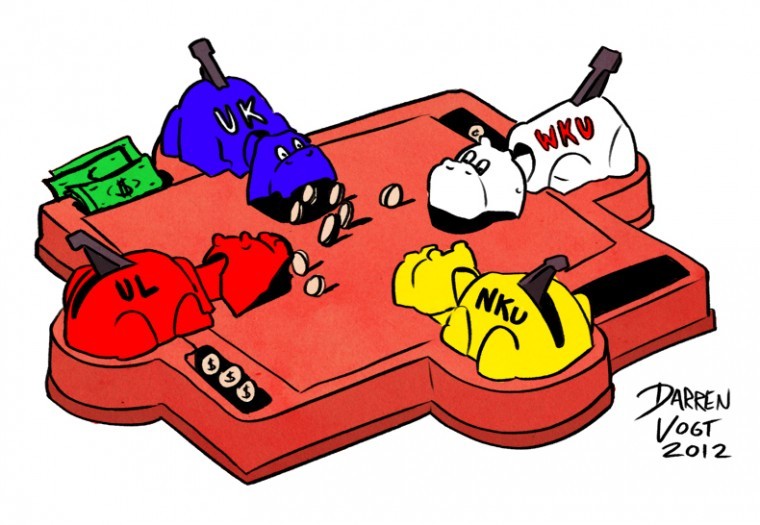 OUR STANCE: The state’s top concern should be education, not renovating or improving facilities at other colleges. With UK continuing to receive money for facilities in such a tough economic climate, it appears the state is catering to its flagship university with misguided priorities.

When money is scarce as it is now, budget cuts are inevitable. However, there is something wrong when such a large amount of money is given to one university to spend while the other universities do not receive the same support.

With the proposed budget, the University of Kentucky would get authorization to spend $175 million to build new dorm buildings along with $200 million in new agency bonds for various projects. WKU would receive $39 million in agency bonds.

In the last decade, WKU has seen its enrollment grow 33 percent from 14,000 students to more than 21,000 students, making it the fastest-growing university in the state. With numbers like this, the state should look closer at its expanding campus and the needs it creates for its students education when making the state budget instead of continuing to take more money from WKU each year.

“I was hoping for a better scenario — a break-even year,” President Gary Ransdell said. “Five million is the largest reduction that we’ve had to date. Ten million has been taken out of our budget since 2008.

“Our primary concern is for 14 years in a row we’ve watched our state funding for students drop.”

With the budget cuts from WKU, the next thing that can be expected to follow is more tuition hikes along with faculty and staff firings. This in turn will undoubtedly affect the quality of our education on the Hill.

Sherron Jackson, associate vice president for budget, planning and policy for the council on postsecondary education, said the state only pays for educational and general-use buildings. For other projects, such as athletic facilities or dorms, the university has to come up with its own funding.

If this is the case then why is UK receiving such a large amount of money for general-use buildings, especially when there is not much money to go around to begin with?

If UK needs money for renovations and improvements, the Herald believes the state should advise the school to look into privately funding those instead of handing it to them.

The Herald also urges the WKU student body to get involved with the legislative process and flex their political muscle.

UK president Eli Capilouto said in a statement that UK would be in Frankfort “every day” to make their case heard for less cuts to their school. WKU should be there as well making its own case because these cuts will affect all of us.

So speak to your local representative and contact the governor about the budget and let your voice be heard.

UK is not the only school in Kentucky. While they play a major role in the publicity of the state, WKU’s impact as the fastest-growing university — and in turn our growing needs — must not be overlooked by our government.