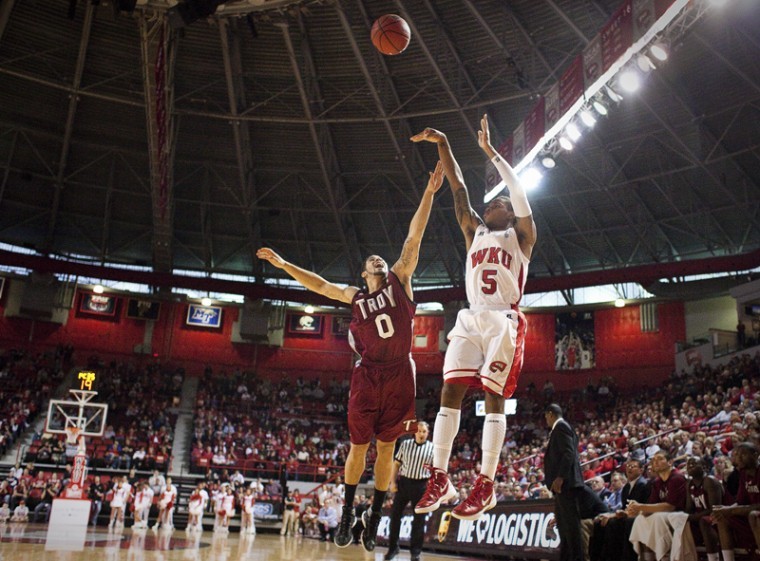 Freshman guard Derrick Gordon takes a shot during the men's basketball game against Troy Saturday in Diddle Arena. Gordon, WKU's leader in points, rebounds and assists, will try to lead WKU to its first victory of 2012 Thursday night at 7 p.m. vs. North Texas.

The newness factor of a new head coach is finally wearing off on the young Toppers and the focus is now on X’s and O’s and gameplanning.

At least that’s what interim head coach Ray Harper said the plan is heading into Thursday’s game against North Texas at 7 p.m. in Denton, Texas.

“We’re trying to get ourselves prepared, what we’d like to do,” he said. “I think the kids are great as far as their energy and communicating and talking and those type of things. We’ll see.”

No one on the current coaching staff has ever traveled to North Texas for a game and none of the players have played at the Super Pit.

But Harper is familiar with Texas, having played at Texas for two seasons in the 1980s. Junior guard Caden Dickerson and sophomore forward Kene Anyigbo are also both from Texas.

“A lot of country music and cowboy boots. That’s what I remember about Texas when I was there,” Harper joked. “I don’t know how much those guys know about that.

“Then you get (North Texas’) lovely team with Tony Mitchell and Chris Jones and those guys. Excellent basketball team, probably one of the most-talented teams in the league.”

Harper said Mitchell, a former Missouri commit and top 15 player according to Rivals.com, is a guy who has the chance go to the NBA after this season, and probably should.

He’ll be playing in just his ninth game at North Texas after sitting out the first semester because he needed to pass a certain number of credit hours to become eligible.

Nonetheless, he’s able to play now and Harper knows just how good he is. He was a member of the USA’s Under-19 team where he led the team in rebounding (7.6 per game) and blocked shots (1.8 per game).

He leads the Mean Green in rebounding with 8 per game and is second in scoring with a 13.1 points per game average. He busted out for 34 points and 16 rebounds against South Alabama on Jan. 5.

So while North Texas’ team as a whole is talented, with guard Chris Jones averaging 14.9 points per game, Harper knows the key is stopping Mitchell. He’s just not sure how to do that yet.

“I don’t know — you got any ideas?” Harper joked. “Been calling a lot of people, we’re open to suggestions. We need to mix it up. You’re not just going to play him straight up, heads up for 40 minutes and think you’re going to just shut him down.”

Harper said the long road trip, which also includes a Sunday game against Denver, will be good for the team because they can spend time with each other and just focus on basketball.

“The unfortunate thing is they’re gonna meet a very, very good basketball team on Thursday night,” he said. “Hey, if we do what we’re supposed to this week and prepare, I’ll take my chances with these guys. They compete and they are getting better each time out.”