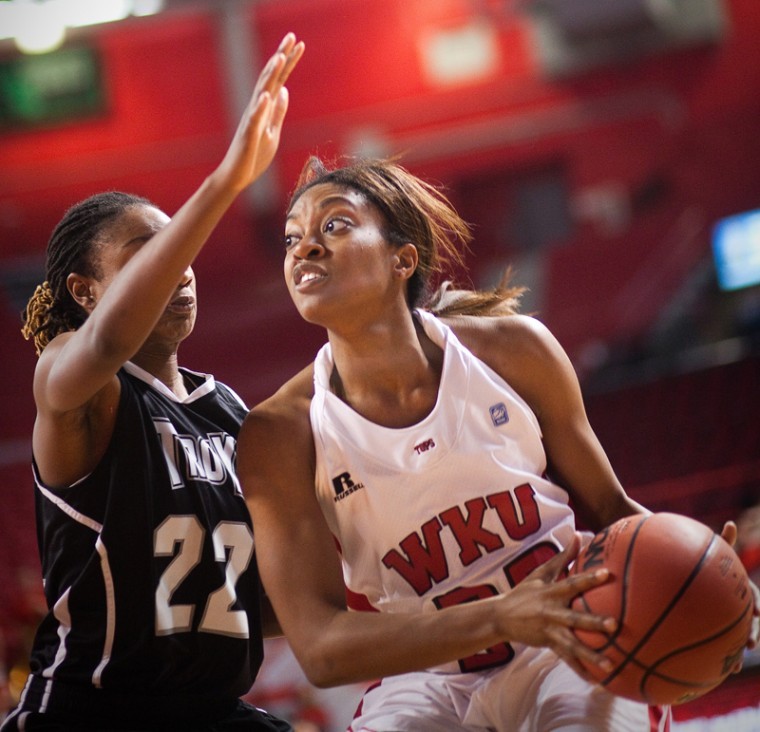 A seven-member freshman class this season brought an overhaul of nearly half the Lady Topper roster.

But the new talent was supposed to be balanced by the experience and leadership of a five-member senior class.

And now, after three straight losses, that leadership may be tested more than ever.

WKU (6-15, 3-6 Sun Belt Conference) sits fifth in the league’s East Division after a two-game road trip to South Florida resulted in a 60-58 loss to Florida Atlantic on Wednesday and a 60-56 loss to Florida International on Saturday.

Things don’t get any easier for the Lady Toppers, who have their first of two meetings with South Alabama (12-9, 5-4) at 4 p.m. on Saturday in Diddle Arena.

Senior guard Vanessa Obafemi said after the loss on Saturday that the Lady Toppers will have to learn from previous mistakes in order to get back on track against a difficult schedule.

“We’re not giving up on this season, the players or the coaching staff,” Obafemi said. “We just have to come out ready to practice every day and play hard like it’s our last day.”

Obafemi was one of the few bright spots for WKU on Saturday in Miami, scoring a team-high 14 points and hitting three three-pointers.

But the Lady Toppers had no answer for FIU guard Jerica Coley, who scored 29 points in the second half and led the Panthers back from what was at one point a 36-21 WKU lead.

Coley, the nation’s second leading scorer, finished with 36 points for the game.

Her go-ahead stepback three-pointer with 2:48 to play gave FIU a 52-49 lead it didn’t relinquish.

Noticeably absent from the Lady Topper rotation against the Panthers was senior forward Keshia Mosley.

The Detroit native came into the game WKU’s second-leading scorer, but never stepped foot on the U.S. Century Bank Arena floor, instead staying on the bench for the entire game.

Head Coach Mary Taylor Cowles said after the game the decision to not play Mosley came from “trying to find combinations.”

No matter their on-court roles, Cowles said she expects Mosley, Obafemi and the team’s other three seniors, forwards LaTeira Owens and Teranie Thomas and center Jasmine Johnson to step up as their Lady Topper careers wind down.

“They know that their career is very limited as far as the number of games they’ve got left in the regular season and even as far as the postseason,” Cowles said. “They’re very aware of that, and you hope at this point the senior leadership really does come true and really does stand up strong.”

Just seven regular season games remain for WKU, and Obafemi said she and her fellow upperclassmen are embracing the leadership role for the stretch run.

“Everybody’s looking up to us, and we have to lead the team and show them how it’s done, because we don’t have a lot of players with experience on this team,” Obafemi said. “We just have to turn this thing around, and I think we still can.”