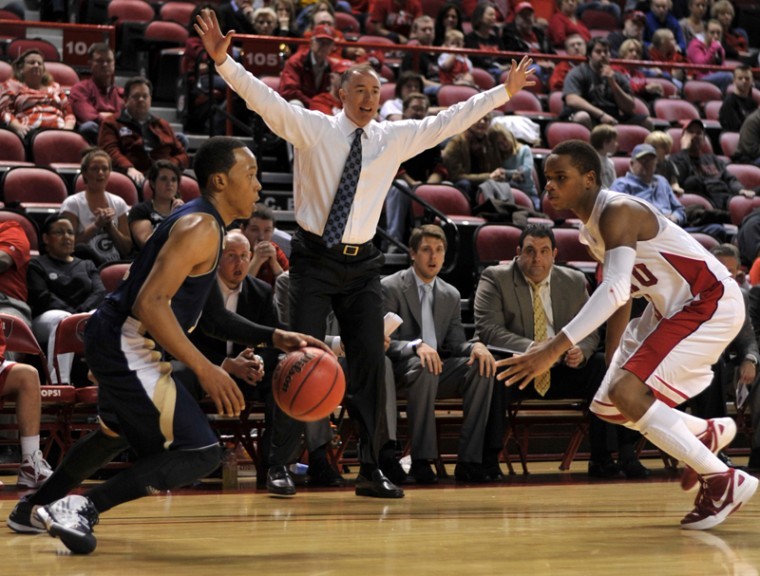 Head Coach Ken McDonald motions to his team during the second half of Saturday's game against Florida International. WKU will face Louisiana-Lafayette at 7 p.m. Thursday.

With rumors abounding about his future as WKU’s head coach, Ken McDonald is keeping his focus on the task at hand.

That came after a three-point loss earlier in the season at Louisiana-Lafayette.

McDonald said he expects the same kind of close game on Thursday.

“They always play us tough,” he said “It’s a good rivalry, ever since I’ve been a part of this program. I think it’s important that our guys understand that it is intense and physical.”

WKU, 1-1 in the Sun Belt, is coming off an 18-point loss at home to Florida International and has now lost four of its last five games.

The only win that came in that stretch was a five-point overtime win at Louisiana-Monroe, a game in which WKU led by as many as 15 in the second half.

Plaguing WKU has been second-half scoring droughts due to not shooting well when the opponent is in a 2-3 zone.

The Toppers went on nearly a seven minute drought against then-No. 4 Louisville to relinquish an eight-point second half lead and eventually fall 70-60. Against ULM, a four-minute scoring drought allowed the Warhawks to climb back in the game and send it to overtime.

“I think it’s a confidence thing, I really do,” he said. “We have good players that are dealing with drought at times. When you miss some shots, human nature is to get down on yourself and we’re just trying to build ourselves up, we really are.

“The only thing that’s gonna cure that is winning and coming together.”

Senior guard Kahlil McDonald will still be available to help with those offensive efforts, despite suffering a concussion after taking an elbow Saturday against FIU.

He’s been wearing a protective mask since the injury, which he’ll continue to do on Thursday.

On defense, WKU will have to stop an offense that’s averaging 70 points per game — nine more than the Toppers. The Ragin’ Cajuns are also shooting 45 percent from the field as a team, compared to WKU’s 38 percent shooting.

McDonald is hoping for an all-out defensive effort to stop Thomas and the rest of the Ragin’ Cajuns, who will be look for their first road win of the season.