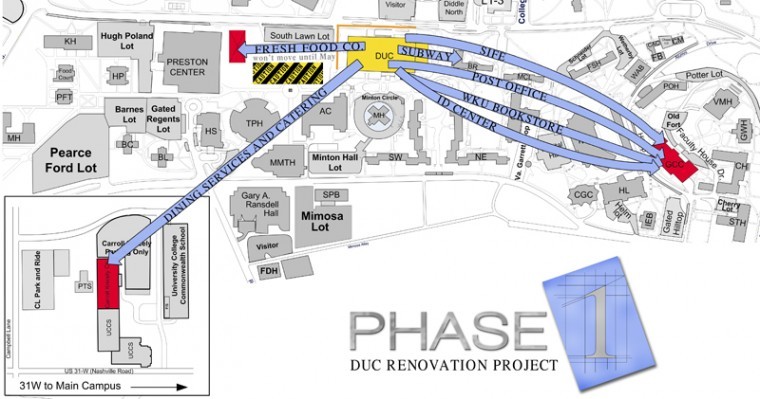 The start of the Downing University Center’s renovation plan will force spaces being used in DUC to relocate in the middle of March, marking the start of the first phase of construction.

President Gary Ransdell said information regarding the renovation plan will be important to get to students.

“It’s a massive, temporary transition plan,” Ransdell said. “With all the student services, all the offices, all the functions in the Downing University Center, most of them having to relocate, some for a year, some for two years, in order for this work to be done as quickly as possible — students need to know where to find those services in this transition.”

The postal office, I.D. center, Students in Free Enterprise, and the Student Government Association will be moved into Garrett Conference Center for at least a year before moving back to DUC.

Subway will move to a permanent location at the bottom of Bates-Runner Hall in the space that previously housed N-Style Hair and Tanning Salon. It’s set to open by July.

Dining Services and Catering will be temporarily relocated to the Carroll Knicely Conference Center.

The floors of DUC will be renumbered and referred to as Ground, First, Second and Third as part of the renovation.

The third floor of DUC, home to REDZ and space for Building Service Attendants, will also be shut down in March. REDZ has not been open since December.

Fencing from the bottom floor of DUC will extend into one lane of the Avenue of Champions for the construction, causing the road to be closed in front of the building.

The first and second floors of DUC — where Fresh Food Company and the WKU Store are located — will remain open in the spring.

Other areas of DUC will start to be renovated in May after commencement weekend.

The WKU Store will be relocated to a temporary location in the Garrett Ballroom, while Fresh Foods Company will be moved into a “temporary structure” similar to a tent, tentatively called “The Big Top,” set up next to the Preston Health and Activities Center.

Plans on where meeting rooms and offices on the second and third floors will be moved to have not been finalized.

Red Zone and the DUC Food Court will remain open while construction works on the Avenue of Champions side and will be relocated once construction starts on the Minton Hall side.

Bryan Russell, director of Planning, Design, and Construction, said the group plans to send emails and put up signs on fencing showing where each office or service will be relocated.

“This project is gonna really take a lot of cooperation from everybody, and patience,” Russell said.

The changes won’t affect incoming freshmen as much, Russell said.

Russell said safety will be the main concern, since the building will be open while construction takes place. He said his department will be working closely with the department of Environment, Health and Safety to monitor air quality and other safety issues.

“Any time you do something that’s different, you do have to take safety into consideration,” said Susie Johnson, Manager of Health and Safety. “You can’t just ignore the people that are going to be in there.”

Johnson said her department will work with the contractors to make sure safety measures are in place.

“…Folks from our office will just pop by to make sure things are going OK, that there’s not anyone sitting, suffering in silence,” Johnson said.

Russell said bids for the Selective Demolition package of the ground and third floors of DUC will be made soon.