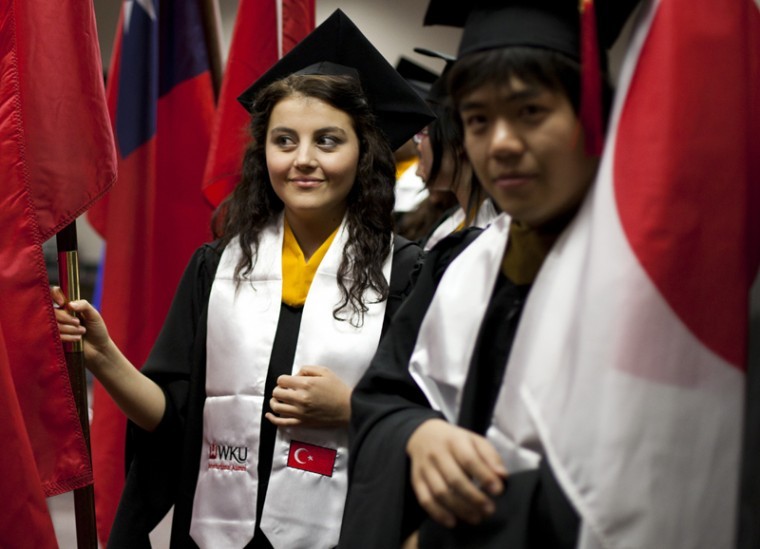 International student Funda Ekiz, left, from Turkey, and Daigo Hasegawa, from Japan, get ready to proceed into the graduate commencement ceremony with their country's flags. The ceremony was hosted at Diddle Arena on Dec. 16, 2011.

Tonight, WKU said goodbye to the fall graduate class of 2011 at E.A. Diddle Arena at the 170th Commencement ceremony.

There were mixed emotions all around as WKU students prepared to walk.

But for one group in particular, WKU’s international students and the staff at the Office of International Student and Scholar Learning, the ceremony was especially bittersweet.

A very important part of the ceremony for the international students is the Parade of Flags, said Ford. Each student with the highest GPA from their country is asked if they’d like the honor of carrying their country’s flag to the stage during commencement.

The Media Room of Diddle Arena was full of students who would be carrying the flags and their families, many of whom braved holiday air traffic to attend the ceremony.

Ford told a story about one student, Daigo Hasegawa, and his mother, who brought a traditional Japanese kimono dress for tonight. Ford said Hasegawa’s mother wanted to bring two kimonos with her, one for tonight’s ceremony and one for the International Graduate Reception last night.

Each kimono and all its accessories takes up an entire suitcase, though, so Hasegawa convinced her that one would be enough.

Another graduate student, Wouter Van Alebeek, from the Netherlands, also received a graduate degree in Leadership Studies Friday night, but has made the decision to stay and work at WKU’s Office of Study Abroad and Global Learning.

He said he’s staying “for her,” her being his wife, Sarah Van Alebeek, who also works at WKU with the ISSS. Van Alebeek said the two met at WKU in 2006 and began dating in 2007.

“It’s a really sweet story they have,” said Judy Scott, a friend of the couple. Scott works as an advisor in the Gordon Ford College of Business, but became friends with Wouter when Scott worked with international students.

There are 738 international students currently studying at WKU and 47 graduating this semester. Ford said many students tell her that they hear about WKU through friends, family and Facebook, and that many students come here already knowing a lot of people on campus.

“If they don’t already know anyone here, students who live in the same areas will talk on ISSS’s Facebook group and get together to meet before they come to America,” Ford said. “They have a really good network of friends and people from their country, so that’s why tonight is good but sad.”