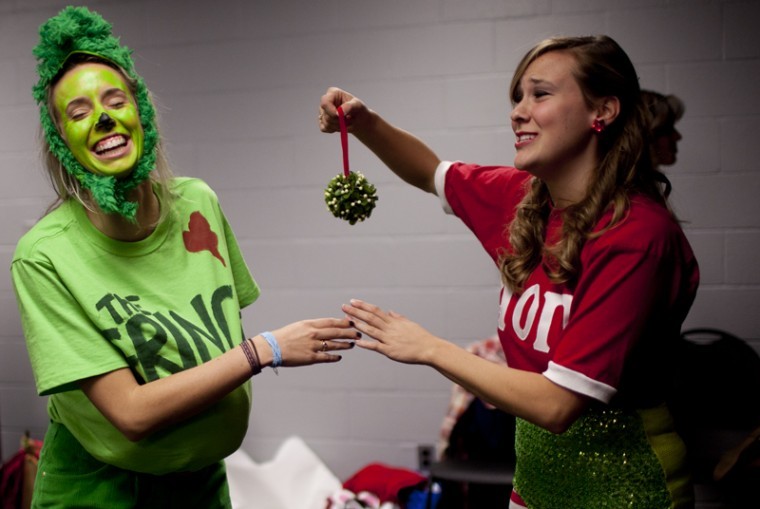 During the fifth Kappa Sigma Christmas Pageant, Louisville senior Natalie Price and Rochester, Mich., senior Kaylee Egerer play with a bundle of mistletoe backstage after Egerer represented her sorority, Alpha Omicron Pi, during the letters portion of the competition.

All proceeds gathered from the entrance fee will be donated to Toys for Tots, which is the organization’s philanthropy.

“We also give toys which are valuable to the children,” said Matt Hodgson, a Louisville senior and Christmas Week Chair.

There were 16 contestants, each nominated from their sorority and few nominated by fraternities.

With escorts from Kappa Sig, the participants competed in three rounds by showing off their best outfits.

In the pageant’s first orund, each woman showed off the letters of her sorority. Some even added Kappa Sig’s letters to their outfits to show their love for the fraternity.

The second round of the competition was formal wear.

Women took the stage in their best dress, with some using the Kappa Sig member dressed as Santa as a prop for their presentation.

In the third and final round, the contestants were asked to show off their Christmas spirit.

Some chose reindeer, one participant was dressed as a letter to Santa, but Chi Omega sophomore Marion Murray showed her spirit dressed as Buddy the elf from the movie “Elf.”

“I love the movie,” Murray said. “I wanted my costume to be something playful, not too serious.”

At the conclusion of the pageant, the judges — one of which was President Gary Ransdell’s wife, Julie — decided the winners.

“I was excited,” Murray said. “This was my first pageant and I’m glad I did it.”