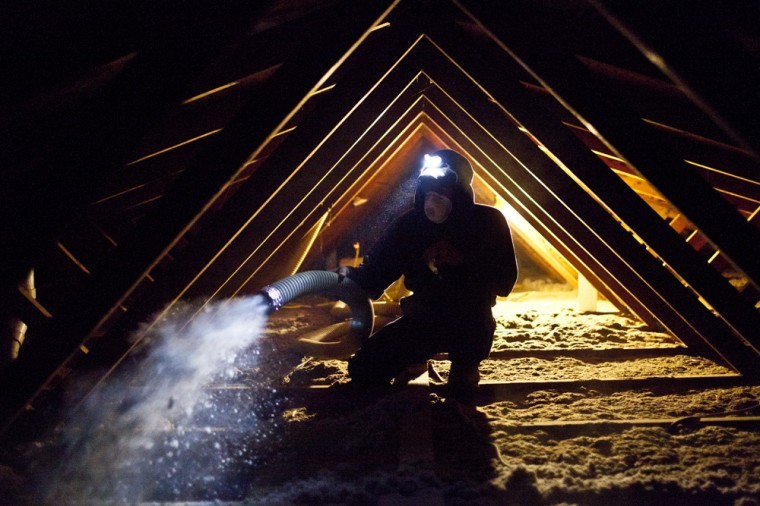 Colton Oller sprays insulation into the attic of a home during a weatherization project as part of the Weatherization Assistance Program through the Kentucky Association for Community Action in Bowling Green, Ky., on Dec. 8, 2011.

As temperatures drop in the Bowling Green area, thermostats are being switched over to heat to beat the winter chill. Yet some people can’t escape from the cold – even in their own homes. Kathy Hunt knows this story all too well.

Hunt, the weatherization director for Community Action of Southern Kentucky, has been helping individuals and families stay warm for the past 10 years by working to provide them with adequate heating systems and insulation.

Hunt, a WKU graduate, said homes without proper insulation and heat puts strain on the inhabitants’ health or budget. Often times, both are affected. Hunt said homeowners are forced to choose between important expenses such as medication, clothing, food and heat.

“If an elderly woman is forced to choose between her medication and her utility bill, she’s going to keep the lights on,” Hunt said as an example.

To help solve this dilemma, Hunt and others at Weatherization CARES take applications from households who are having a hard time keeping up with heating costs.

Applicants who meet specified criteria have their homes surveyed by the Weatherization CARES team. After compiling all of the information taken from a survey, members from the weatherization department meet with the homeowners to set up times and dates for the work to be completed.

“I think we are perceived as window replacers,” he said. “We do more than that.”

In reality, the Weatherization CARES team ensures the safety of their clients by running a series of tests, including checking for propane leaks, insulation issues and even carbon monoxide levels.

After the survey, the results are audited and the team meets with the homeowners to work out a plan of action.

Although windows are sometimes replaced, Manley said he repairs everything that is necessary.

“The goal is to wrap the home and keep it safe,” he said.

This can sometimes include fitting the home for new doors, locks and other safety measures. With every house Weatherization CARES fixes, functional smoke and carbon monoxide detectors are installed, Hunt said.

After the home is properly weatherized, homeowners can save from around $400 to $600 a year from reduced energy costs, Hunt said.

Manley said all of these changes take place within about two and a half days, and for good reason.

Both Hunt and Manley have noticed an increase in applicants lately, most likely due to the economy’s current state. They’ve also been able to service more people because of the American Recovery and Reinvestment Act passed in 2009.

“More people are getting assistance now that have never asked for it,” Hunt said.

Before the act was passed, CASOKY used funds from the Department of Energy and local utility companies.

Charity Parrish, the Public Information Coordinator for CASOKY and a former WKU student, said all the branches of the organization focus on the well being of a family as a whole.

“We look at the big picture and the economic security for each family,” she said.

Oftentimes, if the Weatherization CARES team notices a need in a home that is outside of their services, they refer the homeowner to other services offered by CASOKY including the food pantry and the Head Start program.

Although Weatherization CARES expects funds from American Recovery and Reinvestment Act to be gone by March 31, 2012, they’ll continue to receive money from the Department of Energy and local donors.

Manly said his team will continue to fix homes that need it.