WKU comes up just short in upset bid of No. 4 Louisville 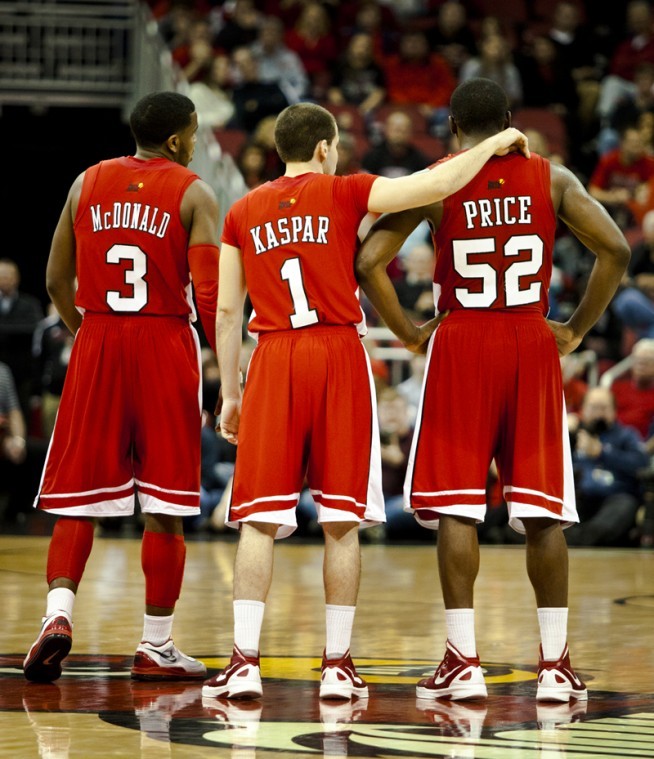 From left, senior guard Kahlil McDonald, freshman guard Kevin Kaspar and freshman guard T.J. Price gather after losing to 70-60 to No. 4 Louisville at the KFC Yum! Center on Friday. WKU dropped to 4-9 with the loss.

LOUISVILLE — WKU almost pulled off yet another remarkable upset of a top five ranked Louisville team.

The Toppers, who entered Friday’s game fresh off of losses to IUPUI and Furman and saddled with a 4-8 record, gave undefeated and No. 4 ranked Louisville all it could handle for nearly 35 minutes before falling 70-60 in front of a crowd of 22,150 at the KFC Yum! Center.

WKU (4-9) led by as many as 13 — Louisville’s largest deficit this season — in the first half and by as many as eight midway through the second half, but a six-minute scoring drought and a stellar performance by Louisville guard Russ Smith off the bench ultimately did the young Toppers in.

Still, Head Coach Ken McDonald couldn’t have been much more pleased with his team’s performance, saying his team needed to hit a “low point” to get a reality check.

“I thought this was our best 40-minute effort in terms of executing and playing hard,” he said. “I think we played really hard. We had a couple lapses, which is going to happen. But we made plays and it was fun watching the guys out there playing hard and listening to what we were trying to accomplish.

“I think even with the loss we made some big strides tonight.”

WKU came in as 26-point underdogs and despite their record, Louisville Head Coach Rick Pitino said the Toppers looked more like an 8-4 team.

McDonald said the coaches showed players film of WKU’s upset of then-No. 3 Louisville in 2008 and noticed how scrappy that team was that game, going after every loose ball.

The Toppers showed that effort from the get-go.

The Cardinals then powered their way to a 14-2 run which put them in front for the first time, 33-32, getting the near sellout crowd on its feet.

McDonald said the Cardinals’ run to end the first half “really hurt.”

“You could just feel the energy in the building shift,” he said. “It started with a free throw where we just weren’t ready for the press. That can flip in a hurt with the way Louisville plays and we didn’t respond well.”

Even then, the Toppers came out with the same intensity they had for much of the first half, opening with a 13-2 run to take a 47-39 lead.

But that’s when the wheels started to fall off for WKU.

The Toppers led 50-47 with 8:47 left to play, but from there went scoreless for nearly seven minutes.

Louisville used that time to pull away for good, eventually leading by as many as 11. Smith had 23 points to lead Louisville, 14 of which came in the second half.

“Russ is Russ, like we’ve been talking about, ” Pitino said. “He is winning us games on just pure intensity and pure heart and he is the reason we are winning. We have got to get the rest of those guys playing like that.”

WKU made a late push to cut the score to 61-57 with just over a minute left, but Louisville made its free throws down the stretch to hold off the Toppers.

WKU, on the other hand, missed seven free throws in the second half and finished 8-of-17 from the line.

“Obviously at the end of the game, you’ve got to make your free throws and do those things to finish out the game,” McDonald said. “But one thing I’m really happy about – we never stopped fighting for 40 minutes. I don’t care if we’re down 10 at the end, we kept fighting and I’m proud of our guys for that and that says a lot about them.”

Both teams came in to Saturday’s game tied for 18th on the NCAA all-time wins list at 1,643 wins apiece.

With the loss, WKU still holds the lead in the series record, 39-36.

Gordon noticed a difference in the team Saturday night.

“This is the only game where we really all played together,” he said.

Crook said the youthful Toppers grew up after playing so well in such a big setting.

“We knew what we had to and and I’m proud of them,” he said. “They bought in to what we were trying to do and their focus was great.”

More importantly, McDonald said he saw glimpses of just how good his team can be heading into Sun Belt Conference play, which starts Thursday with a road test against Louisiana-Monroe.

“Even in a loss you can see the confidence that we built up over the first 30 minutes of the game,” he said. “That’s important to any team. Going into league play, it is important for us to know we played a very, very tough non-league schedule.

“From this point on we can play with anybody.”