WKU’s season over after four-set loss to Marquette 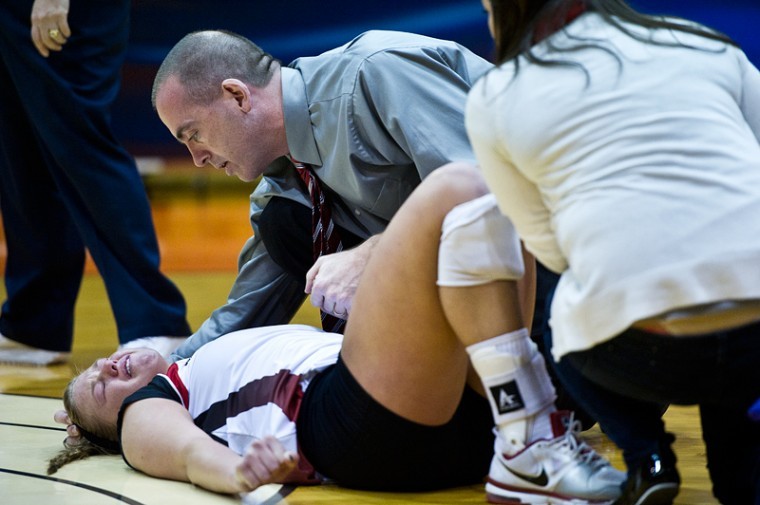 CHRISTIAN RANDOLPH/HERALD Junior outside hitter Jordyn Skinner injured her ankle Friday after a kill in the fourth set of WKU's first-round NCAA Tournament match against Marquette in Champaign, Ill. Skinner's kill tied the set at 23-23, but she was unable to return to the match and the Lady Toppers lost 3-1, finishing the season 31-4.

CHAMPAIGN, Ill. — You’ve heard this one before.

The Lady Toppers’ season came to a close last weekend in Champaign, Ill., for the second year in a row as a key player went down with an injury.

It was the Lady Toppers’ sixth loss in the program’s six NCAA Tournament games.

Making things worse for WKU, junior outside hitter Jordyn Skinner went down with an ankle injury late in the fourth set.

The loss was similar to the Lady Toppers’ first-round NCAA Tournament match last season, when WKU lost to Cincinnati in Champaign after then-junior middle hitter Tiffany Elmore sustained a knee injury in the second set.

“It’s just a little eerie, being here in Champaign and having a player go down with an injury late,” Head Coach Travis Hudson said after the match. “Obviously that hurt us a little in that fourth game, but the opportunities were there for us, and for whatever reason I just couldn’t get us in the right frame of mind tonight to compete at the level that we have for a good portion of the year.”

The match was close throughout the four sets. The two teams split the first two sets before Marquette took the last two by a combined total of four points.

It was close on paper as well. Marquette had a .219 hitting percentage for the match while WKU hit .217, and the Lady Eagles recorded only two more digs than the Lady Toppers.

Hudson said errors from the back line made the “difference in the match.”

The Lady Toppers had 13 service errors compared to nine for Marquette.

“Going in we knew we needed to do a good job from the service line and that’s ultimately what our Achilles’ heel was,” Hudson said. “We didn’t serve the ball very well.”

Senior middle hitter Tiffany Elmore agreed with Hudson, saying the serving deficit was what did in the Lady Toppers.

“That’s really the only part of the game that wasn’t close,” she said. “It came down to serving and they won that challenge.”

The Lady Topper offense was led by Skinner, who racked up 13 kills before her injury. Sophomore outside hitters Paige Wessel and Janee’ Diggins had 10 kills each.

Six of Diggins’ kills came in the first set.

“In practice I’d been working on hitting the ball high, and that was the main thing that helped me out,” she said. “I knew that I needed to do that for us to have a chance.”

Elmore and senior middle hitter Lindsay Williams played their final matches for WKU on Friday. The seniors were part of teams that won more than 100 matches in their four years at the school.

“I can’t say enough about my four years here,” Elmore said. “I’ve loved seeing so many great people in the community come watch us. The fans have gotten so much more involved since my first year.”