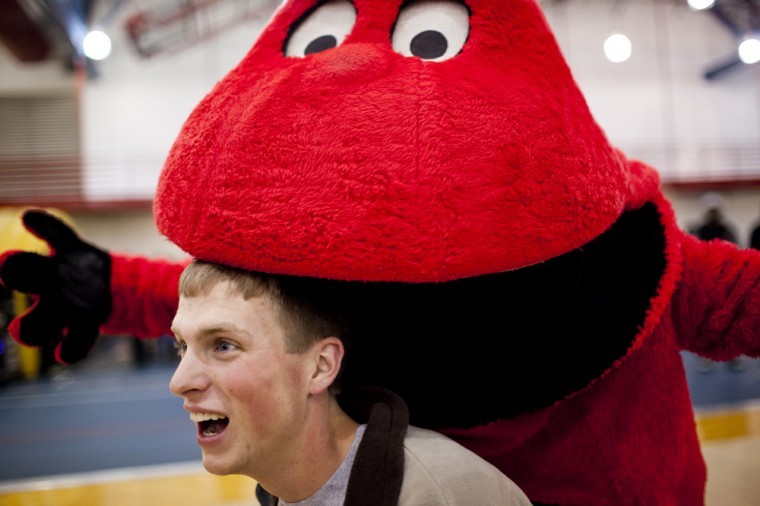 During the celebration for Big Red's birthday party at Preston Center, La Grange freshman Matthew Lawson has his picture taken with Big Red, who pretends to bite his head.

Big Red rang in its 32nd birthday in style last night thanks to WKU Campus Activities Board and about 100 WKU students.

The party was in full swing for the entire two hours, with entertainment from a magician, a DJ, the Major Redz — a WKU dance group — and many more. Throughout the night, many students were gathered by the stage to dance to songs like the Cupid Shuffle.

“I never thought CAB would be able to put on something this big,” said Atlanta senior Cedric Jackson.

Jackson was one of the first students to participate in a game in the blowup TRON laser tag dome in the Preston Center’s gym. He said he thought laser tag was “so awesome” and one of the highlights of the party. TjohnE Productions, a Michigan company that specializes in college campus events, provided the dome for the party.

Louisville sophomore and CAB Concert committee chair Robbie Thompson said he thought the event went very well for the first year and said CAB hopes to make the event even larger next year.

At midnight, as planned, Amazing Tones of Joy sang a birthday song to Big Red, followed by a toast from Louisville freshman Shelby Rice. Rice stepped up to doing the toast after the original toaster didn’t show up. The toast was followed by everyone singing “Happy Birthday” and enjoying some of Big Red’s birthday cake.

CAB also gave out goodie bags of candy to WKU students before they left for the night.

Instead of the usual birthday presents, WKU students were asked to donate toys to the organization Toys for Tots. Around 40 toys, including everything from Super Soaker water guns to Barbie dolls, were donated last night.

CAB also took advantage of today’s sale at the WKU bookstore to purchase one Big Red plush toy for each toy donated during the party, according to CAB president Sylvia Reyes.

“I won’t be here for the event next year, but I’m definitely going to push to have it again,” said Reyes.