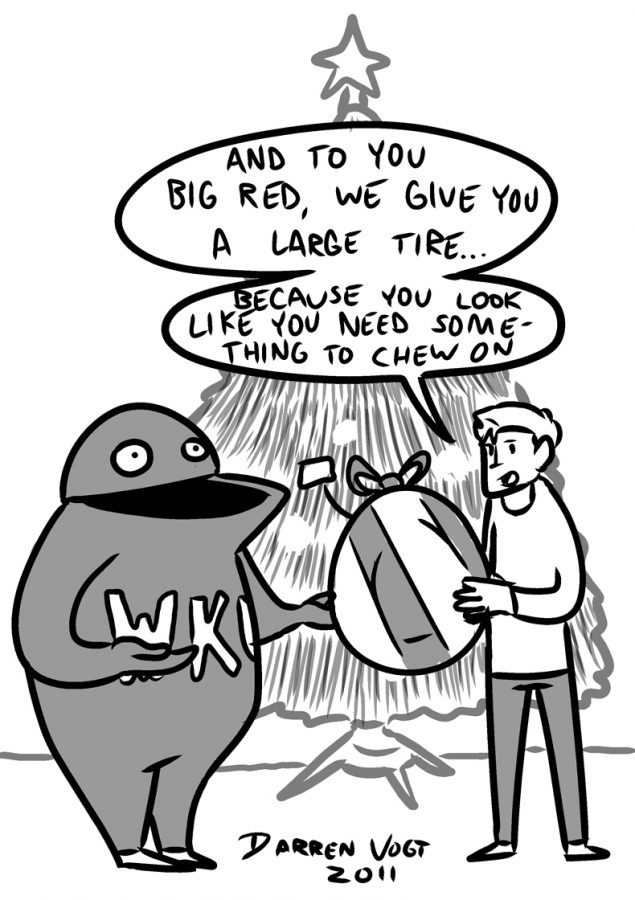 The Issue: Every year the Herald spreads some holiday cheer — and a few jeers — by giving “gifts” to those in the WKU community who really earned them. Who doesn’t like presents?

Our Stance: Throughout the semester, we’ve seen plenty of naughty and nice moments at WKU. With that said, the Herald thinks the following deserve these gifts (wrapping paper not included).

To Bobby Rainey, the Herald gifts you a back massage from the Preston Center. You must be sore from carrying the football team all season. And to defensive coordinator Lance Guidry, the Herald gives you a personal breathalyzer. You know why.

To the Student Government Association, the Herald wants you to have a finance app for those iPads you so often tell us about. Maybe then you won’t be stuck scratching your heads when $15,000 goes unaccounted for.

Ice packs are our gift to WKU’s building service attendants, who worked in sweltering buildings last summer thanks to the school’s new energy usage policies. Start freezing those now in preparation for this summer.

President Gary Ransdell, we’re worried about you — or more specifically, that Chevy Volt you’re driving these days. We gift you a fire extinguisher just in case the battery catches on fire like so many others. Good luck with the electric car.

To Provost Gordon Emslie, you deserve a leash. Well, maybe 4,000 leashes. We know you could use some help retaining WKU’s freshman class.

Students, we’d like to alleviate one of your most distressing first world problems and gift you an idea. Build your own parking lot. It’s that easy, right?

To tobacco users on campus, we don’t really have anything to give you. Then again, we’re not taking anything away (with how slow this tobacco ban business has progressed, it’s not looking like WKU will either).

Cases of O’Doul’s beer should soon arrive at the Pi Kappa Alpha house and the Delta Tau Delta…well, wherever it is you guys hang out. Those might go over better at next year’s rush parties.

Izzi’s, isn’t it more rewarding to give than receive? More chips, please.

And lastly, Tyler Webster, we give you the gift of freedom. Plank where you please.