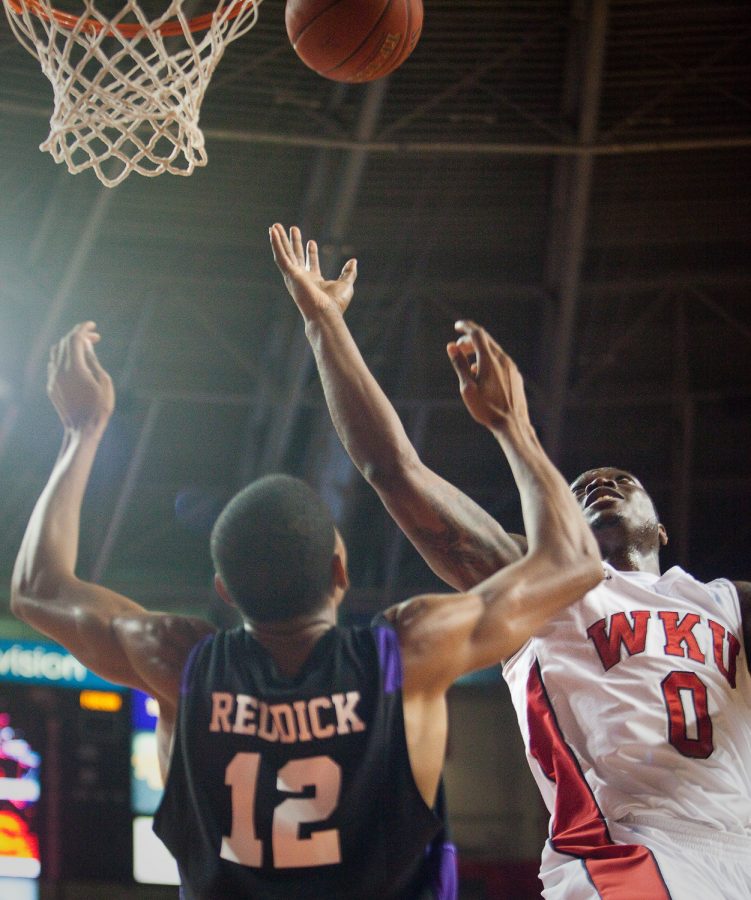 Sophomore forward Kene Anyigbo goes up for a shot during Saturday's game against Furman in Didddle Arena. WKU lost the game, 76-63.

He noticed it again this week leading up to Saturday’s game against Furman.

For some reason, the team just hasn’t been preparing well in practice, he said.

“We’ve got to prepare like we’re going to win,” he said. “This was an exam week. I didn’t think we had a particularly great week in practice. Sooner or later, we’ve got to put our foot down.

McDonald said it’s a matter of executing, because in his eyes, there hasn’t been much of it.

“The one thing we definitely have to get better at is carrying it over from either the huddle or practice to the games,” he said. “I’m not the only coach or the only team that has problems with execution, but when you have some young guys on the floor, it takes time.”

For the players, it’s been a mental struggle all season. Freshman forward George Fant talked earlier in the season about how the team simply wasn’t focused on the floor.

The week leading up to Saturday’s game, freshman guards T.J. Price and Derrick Gordon said the mental problems have caused the Toppers to beat themselves.

It was no different in Saturday’s loss to Furman, junior guard Jamal Crook said.

“Late in the game guys got to tune in…focus,” he said. “And I think a lot of it comes back to a mental thing. Each day we’ve just got to prepare for situations like that. It’s going to be days where its many more times that we’ll be in this situation. We’ve just got to fight adversity, come together and handle it.”

McDonald said one of his biggest concerns is when he doesn’t think his team is “fighting.”

While that wasn’t the case in his eyes on Saturday, he said an element of pride has been absent this season.

“We’ve got to understand how great it is to be a Hilltopper,” he said. “That’s what we’ve talked about a lot here lately. It’s time to start working hard enough to get over that hump, and I feel like these guys are. I know they are. It’s just taking some time.”

Sophomore forward Stephon Drane sat out for the fifth straight game due to continuing struggles with a hyper-extended knee that he suffered before the season started.

Sophomore forward O’Karo Akamune was also left on the bench on Saturday against Furman, but not because of an injury.

McDonald said he just had guys in front of Akamune that he had more confidence in, namely freshman forward Vinny Zollo, who made his third career start on Saturday.

Akamune has appeared in 10 games this season, averaging 2.7 points and 3.4 rebounds per game.

-At just under 38 percent, the Toppers’ field goal percentage ranks 328th in the NCAA.

-Saturday’s game against Furman marked the first time all season that WKU more assists than turnovers (11 and 10 respectively).

-WKU has scored 70 points or more just one time this season and has scored under 50 points three times.

-Derrick Gordon’s 14-point, 13-rebound performance against Southern Illinois is the only double-double for a WKU player this season.