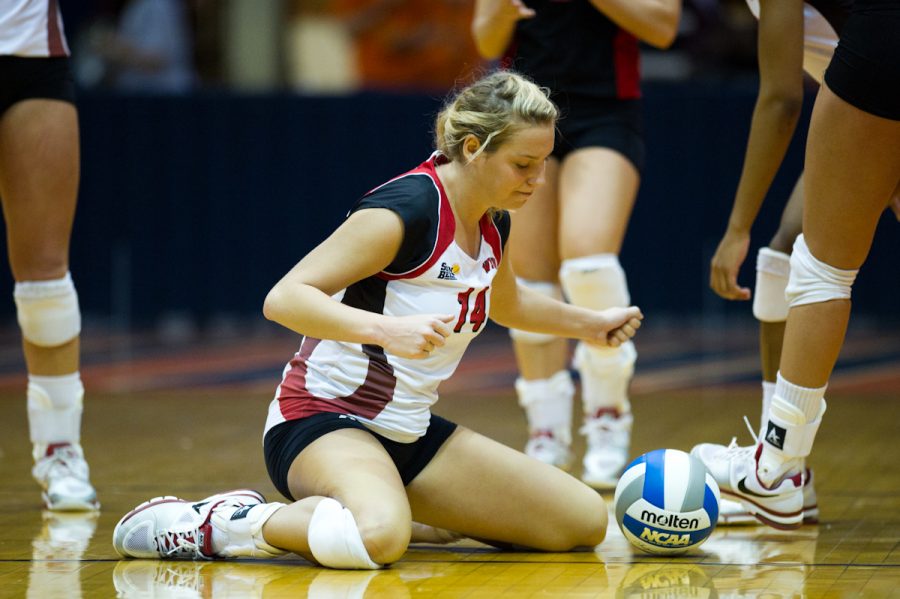 Sophomore setter Melanie Stutsman swats the ball in frustration after losing a point in the fourth set of WKU's NCAA Tournament First Round match against Marquette at Huff Hall in Champaign, Ill., on Friday. The Lady Toppers lost 3-1 and ended the season 31-4.

CHAMPAIGN, Ill. — One of the most successful seasons in WKU volleyball history came to a close on Friday night with a 3-1 loss to Marquette in the first round of the NCAA Tournament.

The Lady Toppers and Marquette put up very similar statistics in the postseason match, but the Lady Eagles scored when it mattered, winning the final two sets by a total of four points.

The first-round loss at Huff Hall Champaign, Ill., was WKU’s third straight loss at the venue and kept WKU (31-4) from winning its first even NCAA Tournament match.

It puts to end a season in which the Lady Toppers climbed as No. 21 in the RPI poll and No. 24 in the American Volleyball Coaches Association poll, the highest the program had ever been ranked.

“I’m just very very disappointed to see our season come to a close,” Head Coach Travis Hudson said. “Marquette really competed, we really competed and I don’t think you can draw up a box score that looks much more evenly matched up.”

Marquette had a .219 hitting percentage while WKU hit .217, and the Lady Eagles recorded only two more digs than the Lady Toppers.

Hudson said errors from the serving line made the difference in the match. The Lady Toppers recorded 13 service errors to Marquette’s nine.

“Going in we knew we needed to do a good job from the service line and that’s ultimately what our Achilles’ heel was,” Hudson said. “We didn’t serve the ball very well and it was the difference in the match.”

It was the last match of senior middle hitters Lindsay Williams and Tiffany Elmore’s career at WKU. They each recorded eight kills and had a big impact on the Lady Toppers’ defense, as Elmore had five blocks and Williams recorded six, including two solo blocks. Williams also had a team-best .333 hitting percentage.

WKU was led on offense by junior outside hitter Jordyn Skinner, who finished with 13 kills, for much of the match until she went down with an apparent ankle injury and had to be helped off the floor late in the fourth set.

The loss was eerily similar to WKU’s first-round match last season when the Lady Toppers fell to Cincinnati in Huff Hall in Champaign after then-junior middle hitter Tiffany Elmore tore her anterior cruciate ligament during the match.

Hudson couldn’t help but see the similarities to last season’s tournament loss and this year’s.

“It’s just a little eerie being here in Champaign and having a player go down with an injury late,” he said. “Obviously that hurt us a little in that fourth game but the opportunities were there for us and for whatever reason I just couldn’t get us in the right frame of mind tonight to compete at the level that we have for a good portion of the year.”