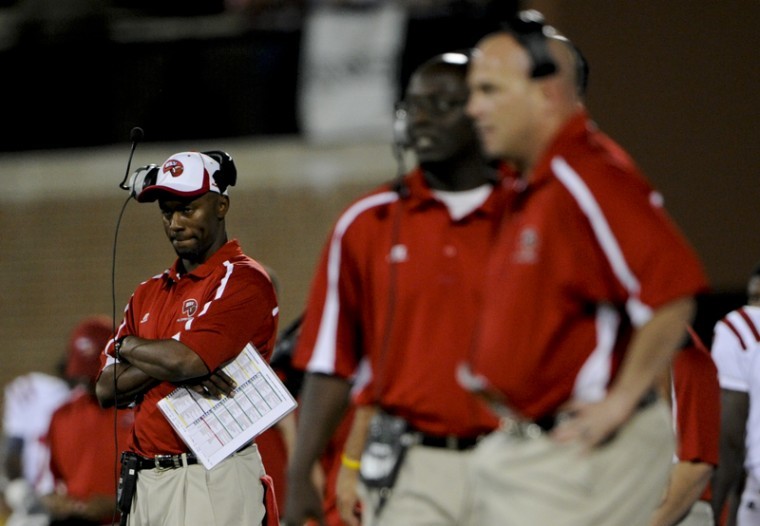 Head coach Willie Taggart stares during the second half of the WKU vs Indiana State game at Smith stadium. The Toppers are riding a five-game winning streak heading into Saturday's game vs. No. 1 LSU.

BATON ROUGE, La. — WKU will get a chance to prove oddsmakers wrong Saturday.

The Toppers are 41-point underdogs for their 6 p.m. date against BCS No. 1 Louisiana State in Tiger Stadium.

Head Coach Willie Taggart said his team has avoided listening to those outside the program this week who question whether WKU even belongs on the same field as LSU.

“If you buy into that, you don’t stand a chance. You already lost,” he said. “That’s what happens in a lot of these ballgames. Teams lose before they even step on the football field. We can’t allow that to happen.”

The Toppers have played in similar atmospheres in the past.

Two years ago WKU opened its 2009 season in Tennessee’s Neyland Stadium, where the Toppers lost 63-7 to the Volunteers.

Last season the Toppers opened at Nebraska and were sent back to Bowling Green with a 49-10 defeat.

WKU’s practices throughout the week have been accompanied by piped-in stadium noise to prepare the team for the stadium known as “Death Valley.”

Sophomore fullback Kadeem Jones said the artificial noise was an effort to get used to the Tiger Stadium environment the Toppers will find themselves in Saturday.

“It kind of reminds us of last year playing at Nebraska the first game,” Jones said. “We’re working on the silent count and stuff to prepare for the noise. The atmosphere is going to be nice anyways.”

Still Taggart said his team will be focused more on the players on the field rather than the atmosphere surrounding it.

WKU’s losses to Tennessee and Nebraska kicked off 0-12 and 2-10 seasons for the Toppers.

But this WKU team is riding a five-game win streak and currently stands a 5-4, the program’s first-ever winning record since completing the transition to the Football Bowl Subdivision in 2009.

Senior outside linebacker Ben Duvall was on the field for the losses to the Volunteers and Cornhuskers and said the 2011 Toppers are better equipped to play with nationally competitive components than were WKU teams in the past.

“Recruiting has helped,” Duvall said. “Coach Taggart’s helped in a lot of ways.

“It’s definitely just the confidence. We’re riding a five-game winning streak. That’s helps a lot. In the past we haven’t won as much. Coming into this game, confidence goes a long way.”