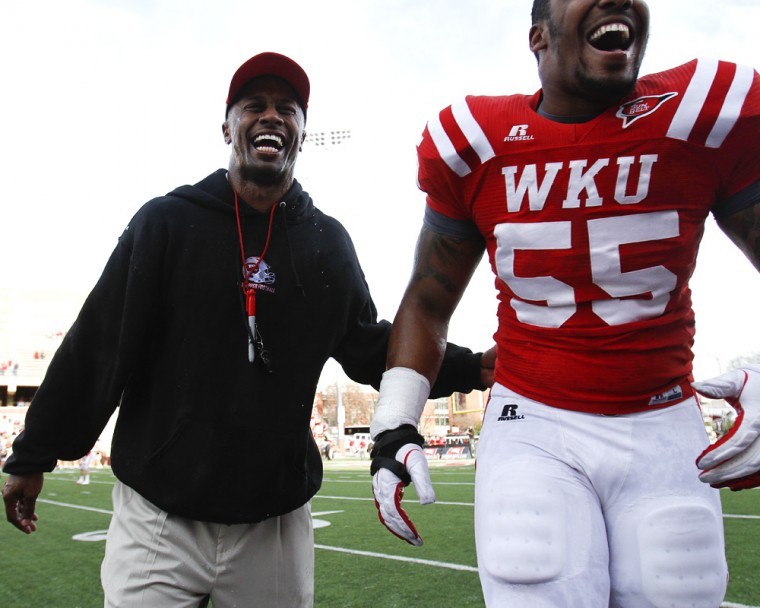 Head Coach Willie Taggart went out for his son’s birthday on Saturday night, just hours after his WKU team beat Troy for its seventh win of the year.

With the Toppers in the hunt for a potential bowl berth, he said his son wanted to head to the bowling lanes.

“He said he wanted to go bowling because he felt we were going bowling,” Taggart said.

But whether or not the Toppers will indeed receive a bowl invitation remains to be seen.

WKU is one of several bowl eligible teams seeking an at-large berth to one of the Football Bowl Subdivision’s 35 bowl games.

There are currently 71 teams eligible for a bowl berth, with five teams needing one win this weekend to become eligible.

The following results would help WKU’s chances of receiving an at-large bowl berth:

Should those results play out the way the Toppers hope, the final four bowl spots will most likely be secured from a group of six that includes WKU, Florida International, Western Michigan, Ball State, either Toledo or Temple and a Mountain West at-large candidate (will likely be either Air Force, San Diego State or Wyoming).

The Toppers are taking the early part of the week off from practicing, a time in which Taggart said he’ll meet with all 103 of his players individually.

Taggart said Monday won’t lobby to any bowls directly, instead letting the school’s administration take care of that.

“I’m a football coach. I let those guys do all that,” he said. “I did my part. I got this football team ready and we went out and took care of business. Now we sit back and see what happens.”