‘Clash of the Flash’ a reunion of Lone Oak stars Brown, Robinson 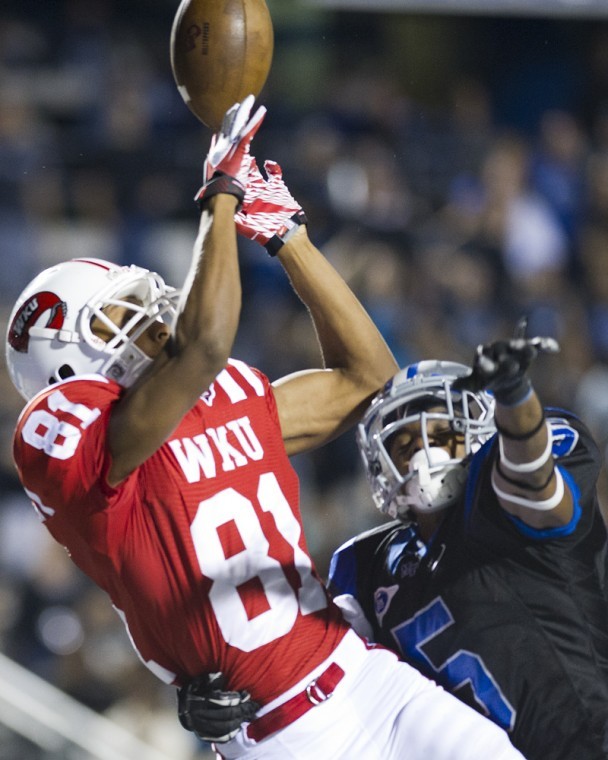 WKU receiver Jamarielle Brown and Troy quarterback Corey Robinson refer to each other as “brother.”

Brown moved in with the Robinson family just before the end of his sophomore year of high school and remained there until Robinson, a year ahead in school, graduated.

The Lone Oak High School graduates helped kick-start a winning tradition there, beginning with the 2007 season. The Purple Flash, who won a total of 16 games from 2004-2006, finished at 14-1 and didn’t lose a game until the state championship.

“I think the boys wanted to focus on getting together and developing a relationship on and off the field,” said Kenny Robinson, Corey’s father. “It worked out to be a pretty productive year for both of them.”

Lone Oak’s success worked to Robinson and Brown’s advantage off the field, too.

The night before a preseason scrimmage, Robinson’s dad grilled steaks for dinner. Results from the next night were so spectacular that the boys brokered a deal with “Pops.” A win on Friday meant a steak the following Thursday.

Kenny Robinson prepared 14 steak dinners in all. Because the team left town on Wednesday before the championship that Saturday, there was no steak dinner that week.

Corey Robinson will on Saturday lead Troy to Bowling Green to face Brown and WKU, the closest the duo has played to Lone Oak since beginning their collegiate careers.

WKU has in turn crafted the “Clash of the Flash” promotion, which allows fans of the pair to purchase unlimited $6 tickets in Section 332. Nearly 200 tickets had been spoken for in the name of Clash of the Flash as of last week.

“Me and Jamarielle have always loved the fans and community at Lone Oak,” Corey Robinson said. “I still appreciate all the support we got and still get to this day.  That’s why we do it — for the fans and to be out there having a good time. I’m glad people still follow us.”

Brown said all he and Robinson ever talked about was starting a dynasty.

“After showing people that we could do it, I feel like the whole community bought in,” Brown said.

“That was the year that Lone Oak became hooked on football, and those two guys played a huge role in that,” Treece said.  “It’s really exciting for Lone Oak as a high school and a community to be able to sit back and see those guys on TV and say that we got to see that.”

Brown said he recognizes that Lone Oak did a lot for him, and considers the continued support a blessing.

“I’m sure before next week they’ll definitely be aggravating each other,” he said.

Both Brown and Robinson made it clear that winning the game is the top priority.

WKU needs a win Saturday to boost its bowl hopes and maintain a shot at claiming a share of the Sun Belt championship with Arkansas State.

Even so, Robinson said the personal bond between he and Brown will be present.

“We love each other to death,” he said. “I’d still do anything for him and I still root him on and wish him the best in every situation.”