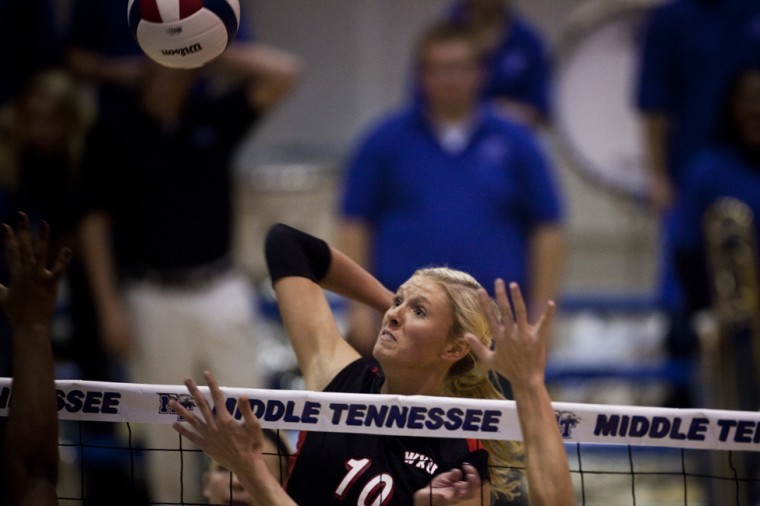 sets on Saturday to win the Sun Belt Conference Tournament

The victory ensures that WKU (31-3) will get an

Top-seed WKU, rolled through the first two rounds of

the tournament, beating Troy on Thursday and Florida International

on Friday. The Lady Toppers then faced their toughest competition

against MTSU, the only Sun Belt team to beat the Lady Toppers in

“This is something we’ve been building toward all

year, and it’s so satisfying to come out on top,” Head Coach Travis

The match was close from the start, but the Lady

Hudson said the way his team bounced back after the

“I’ve said it time and time again this year, but this

is a team that never wavers,” he said. “We had a poor second game,

but we were able to let it go and keep focused.”

By beating the Lady Raiders in the championship, WKU

finishes the season 2-1 against its rival.

“I think we’re all a little tired of hearing that

Middle has got our number,” Hudson said. “Middle is a great team

but we took the two that mattered this year.”

weekend with a dominant performance, racking up 13 kills and 17

digs, both team-highs, en route to being named the tournament’s

Skinner said everyone on the team knew they were

going to have to step up to win.

“We all knew we were going to have to play our best,”

she said. “We just wanted to come in, have fun and play hard and we

were able to win.”

outside hitter Paige Wessel were big offensive factors with 11 and

10 kills, respectively, contributing to a team total of 52.

the Lady Topper defense hold MTSU to a .162 hitting percentage and

The championship is the fourth in WKU’s history and

first since 2008. The 31 wins the team has compiled this season are

tied for third-most in school history.

The NCAA Tournament selections will be announced at 5

Skinner said the Lady Toppers have been preparing for

the postseason all year.

“We’ve been ready since the start of the year,” she

said. “That’s been our big goal, and we’re excited to finally be