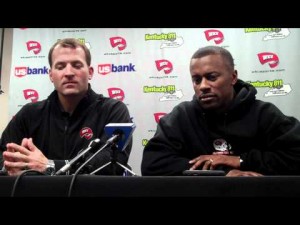 Willie Taggart’s wallet may be getting rewarded in the coming days for a historic WKU football season.

Athletics Director Ross Bjork on Tuesday said that he’d sit down with the Toppers’ head coach in the coming days to discuss a new contract.

Bjork’s statement comes on the heels of a regular season in which WKU went 7-1 in Sun Belt Conference play one season after finishing 2-6 in the league, the largest turnaround in conference history.

“I will tell you we are working on a package for coach Taggart and his future,” Bjork said. “That’s what you have to do, we were prepared to do that even before we won seven games, is to protect this staff and Coach Taggart at the helm.”

Taggart’s current contract, signed after he was hired in November of 2009, pays him $225,000 over four years, with an option for a fifth year.

Taggart’s salary is tied with Louisiana-Monroe Head Coach Todd Berry’s at 108th out of the 110 head coaches in the Football Bowl Subdivision whose salaries were reported by USA Today.

Bjork said the university wanted to “secure Taggart for a long time” at WKU.

Several jobs have opened in recent days, and Taggart’s name has popped up in conversations of young FBS coaches on the rise.

Taggart compared that speculation to the various bowl projections being tossed around for his Toppers.

“My name is popping up the same way those bowl predictions, those people that really don’t know what’s going on,” he said. “I have no comment on that. I haven’t talked to anyone about anything.”