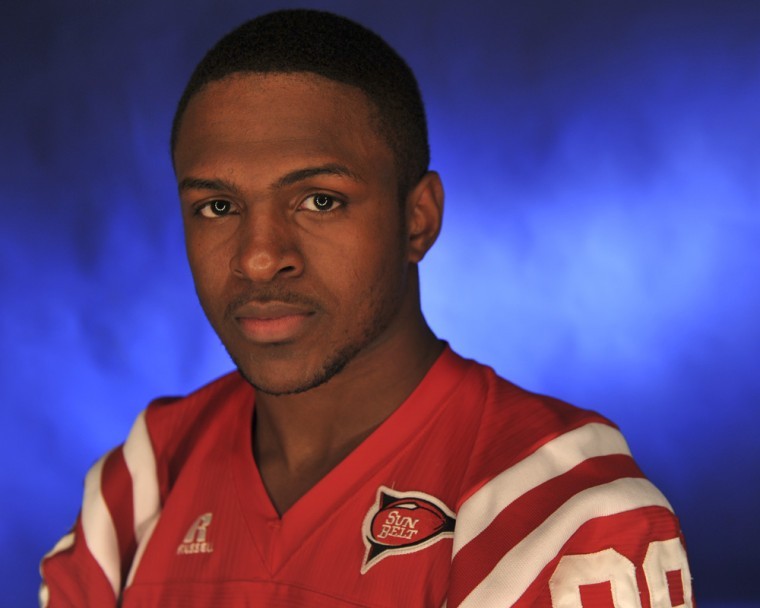 Senior Ketler Calixte is a native of Delmas, Haiti, and moved to the U.S. in June 2002. He is now a defensive lineman for WKU. He transferred in the fall of 2009 and is an interdisciplinary studies major. JABIN E. BOTSFORD/Herald

Ketler Calixte said he will be forever changed by his past. For 13 years, the senior defensive end on WKU’s football team lived in Haiti.

Calixte was born in Au Cayes, Haiti, but grew up in Port au Prince. While growing up in Haiti, Calixte had the bare minimum. Calixte said he was just like the majority of most Haitians.

“We rarely had electricity. We had it about five hours a day, if we were lucky,” he said.

“We couldn’t afford a soccer ball,” Calixte said. “We had to make a soccer ball. We balled up paper together and wrapped tape around it.”

To him, multiple pairs of shoes and hot water are luxuries.

“I don’t think anybody had hot water at their house,” Calixte said. “As a matter of fact, I don’t think people had running water.”

Calixte said his family’s water was kept in a reservoir. He would get a small cup, dip it in the reservoir of water and pour it over his head.

He lived in a two-bedroom house with seven and sometimes eight different family members. Calixte and one of his younger brothers shared a bed.

Calixte said “almost every night” he would hear gun shots while he was trying to sleep. He said he wasn’t scared by the gun shots because he didn’t know any better.

“I would just pray that no one would break into our house,” he said. “When I grew up there, that was all that I knew. I didn’t think much of it. I was a happy kid. It didn’t bother me.”

At 9 years old, Calixte visited New York City with his family. He said he “slept like a baby” in Brooklyn. Calixte told all his friends when he got back to Haiti that New York City had electricity 24 hours a day.

Calixte recalls visiting his uncle in Long Island and going to McDonald’s.

“I had a Big Mac and I thought it was the best thing ever,” Calixte said.

Four years after having his first Big Mac, Calixte and his family moved to Port Charlotte, Fla., in June 2002. Calixte attended high school in Port Charlotte and began to play football.

After graduating high school, Calixte played Division II football at Tusculum College in Tennessee. He transferred to WKU after his sophomore season.

Calixte started playing with the Toppers as a defensive end in the summer of 2010 but is sitting out the rest of his senior season with a torn triceps.

With the career-ending injury, Calixte said he sees the best in every situation and looks at a glass half-full instead of half-empty.

“My faith in God drove me to where I am now,” he said.

“Ket is caring,” Knowles said. “He is good at giving advice, and he can relate to anyone.”

Senior long snapper Joey Dunphy said Calixte is just a “nice guy.” Dunphy has known his fellow teammate for two and a half years. Dunphy was impressed that Calixte stuck around for this senior season after an injury.

Dunphy said Calixte is “very humble” and “very mature.” The long snapper said he goes to Calixte if he ever needs someone to talk to.

“The fact that he tore his triceps and still has enough loyalty to the Tops to stick around and support the team is extremely impressive,” Dunphy said.