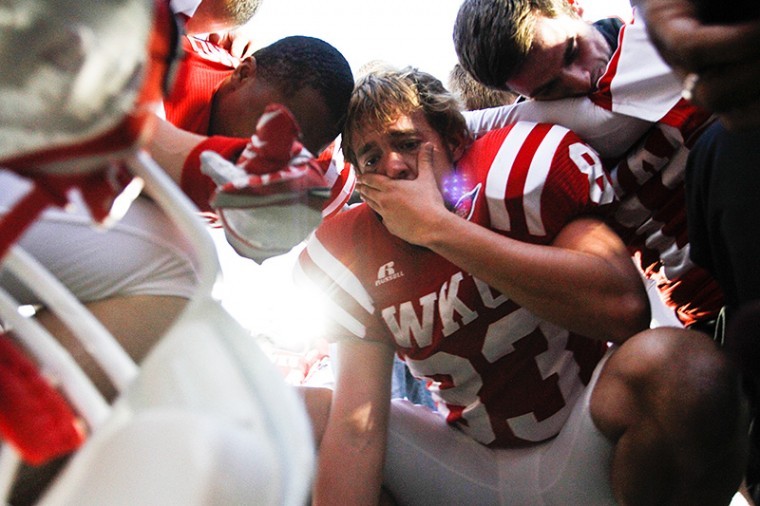 WKU players gather around Senior Casey Tinius moments after he kicked a game-winning field goal Saturday in the Toppers’ 10-9 victory over Florida International. Tinius hadn’t made a field goal since WKU’s season opener against Kentucky.

Casey Tinius said he had always been mentally ready to go in if his time came.

The senior kicker, 1-for-8 on field goal attempts this season coming into Saturday, had seen his job taken by freshman Jesse Roy and hadn’t kicked since Oct. 15.

His first and only attempt of the day came as the Toppers trailed 9-7 with four seconds left, needing to make a 34-yard kick to win the game.

Taggart walked around the sidelines as Tinius trotted on to the field, telling his team to believe the former Bowling Green High School standout would kick WKU to its fifth straight win.

Tinius proved his coach right, putting the kick through the center of the uprights and into a crowd of celebrating fans standing in the grass area behind the end zone.

An emotional Tinius was lifted by players and paraded around the field, his kick securing a 10-9 win.

The victory gave WKU a 5-1 Sun Belt Conference record and put the Toppers one win away from bowl eligibility.

“That had kind of been a long time coming for me,” said Tinius, named the starter for this weekend’s game against Louisiana State. “When you really stop and think about it, that should be a kick that there’s no hesitation for him to send us out there to try.

“That should be a kick made at least 90 percent of the time for a college kicker. I’m just glad I could do it for these guys.”

Tinius’ kicking struggles had dated back to the 2010 season.

But last season Tinius was just 6-of-15 and lost his job temporally to backup Monte Merrick.

Taggart declared the kicking spot an “open competition” during fall camp, and Tinius won that competition over both Roy and Merrick.

Then Tinius underwent his early season struggles, Merrick went down against Florida Atlantic with a hip flexor, and suddenly Roy became the team’s starter.

Just one week prior to the FIU game Saturday, Roy had kicked an overtime game-winner against Louisiana-Monroe.

Though the freshman had taken Tinius’ role, Taggart said the senior kept an upbeat attitude and became “the biggest cheerleader” on the Topper sideline.

Taggart said it was Tinius’ attitude during times of adversity that made his game-winning kick even more special.

“Couldn’t wish for anyone else to win that game for you than Casey,” Taggart said. “He’s been in a rut for whatever reason it was, now hopefully this is a start of a new beginning for him.”

Taggart confirmed Monday that Tinius will be WKU’s starting kicker this Saturday against LSU.

Making a kick against the BCS No. 1 Tigers would be a big moment in Tinius’ career, but he said it will be tough to unseat last Saturday’s game-winner as the biggest kick of his life.