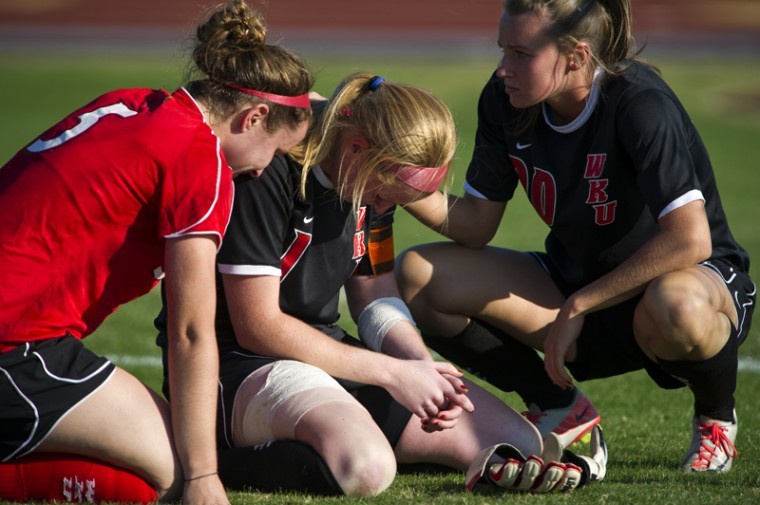 MURFREESBORO, Tenn. — Despite not allowing a goal in the Sun Belt Conference tournament, the Lady Toppers were sent home with a second-place finish.

The Lady Toppers prevailed in penalty kicks in the semifinals, but couldn’t do it again in the championship, falling to Florida International 4-3.

“It’s kind of weird. It’s like how didn’t you win then (since the team didn’t allow a goal),” senior goalkeeper Libby Stout said. “It’s just hard to decide a game by penalty kicks. It’s a hard pill to swallow. It’s luck of the draw really.

“If you look at the scoreboard, we had really everything in our category except for the goal.”

Both teams maintained possession in the first half, but there weren’t many scoring opportunities.

FIU held WKU to two corner kicks and allowed zero shots in the first half. FIU managed six shots in the half, four of which were on goal.

“If we wanted the championship, it was out there, we just needed to go take it.”

WKU came out in the second half looking to attack more. The Lady Toppers took five shots in the first eight minutes of the half to put more pressure on FIU.

WKU continued to push, receiving multiple free kicks in the offensive third. The Lady Toppers had a chance with 16 minutes into the second half when senior forward Mallory Outerbridge took a free kick that was almost headed in by FIU for an own goal.

WKU outshot FIU 13 to two on the half, but couldn’t find the back of the net.

The two teams were still tied after 90 minutes, causing the game to go into two 10 minute golden goal overtime period.

“We played a phenomenal second half,” Neidell said. “Probably the best we’ve played all season. We were magic in the second half.”

The Lady Toppers held the edge in shots in the first overtime period at four to zero, but couldn’t find the back of the net.

Their best chance came off a shot by senior midfielder Lindsay Williams from 18 yards out that the FIU keeper made a diving save on. There was also a corner kick that was headed wide of goal by junior defender Ali Stahlke.

The first chance of the second overtime came when senior forward Amanda Buechel played a cross to Outerbridge, who volleyed it just wide into the side netting on the outside of the goal.

WKU had another chance with less than four minutes left when a through ball was played over the top to Outerbridge. After a couple touches, she struck the ball right at the FIU keeper.

The second overtime ended with the two teams still even, meaning penalty kicks.

FIU managed to eliminate the Lady Toppers and claim the automatic NCAA berth, winning the shootout 4-3.

“I would’ve liked to have played another overtime period, but that’s not what they do,” Neidell said. “They do penalty kicks. Sometimes you’re on the winning end, other times you’re on the losing end and unfortunately today we came up short.”

Williams liked the look of the team throughout the tournament and thought the odds were looking good.

“We’ve always had the effort,” she said. “That’s something we hung our hat on every game was how hard we worked. This tournament was great. We were firing on all cylinders and everything was shaping up for perfection.”

WKU ended its season with an overall record of 13-6-3.

Four Lady Toppers were named to the All-Tournament team after the match: Outerbridge, Stout, Stahlke and senior midfielder Kelsey Meyer.