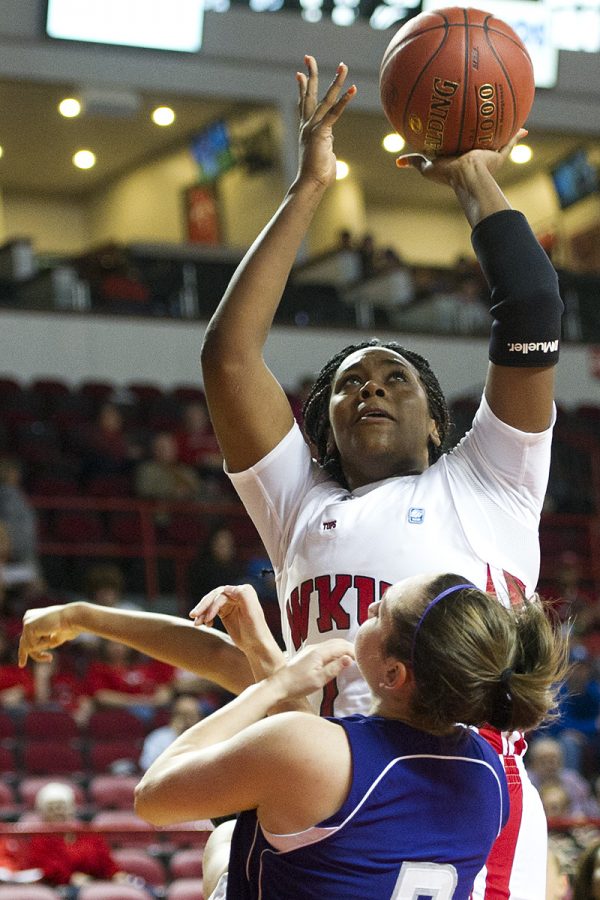 Senior forward Keisha Mosley draws a blocking foul while going up for a shot against Kentucky Wesleyan in the second half at Diddle Arena.

WKU went to the half Sunday struggling to put away a resilient Kentucky Wesleyan team.

The Lady Toppers trailed with less than three minutes remaining in the half, needing an eight point run to take a 37-31 lead into the locker room.

But WKU broke out of halftime with an 18-6 run, easing the way to an 84-59 victory over the Panthers in an exhibition game.

“I was nervous so I know other people were too,” senior forward LaTeira Owens said following the game. “After the first half we talked about some things we need to work on before the coaches came in. We just knew the first half was over with so we came out and played our game in the second half.”

KWC, which saw eight players score in the first half, did much of its damage early in the half court offense.

“I thought our help side defense was probably our biggest weakness,” Cowles said. “We were really not communicating, I felt like defensively, and that’s a little disheartening because we work a lot on simple communication on the defensive end of the floor.”

The Lady Toppers gave up a three-pointer early in the half that cut their lead to 37-34.

But WKU then launched a decisive 18-3 run, led by six points from senior forward Keisha Mosley.

The 6-foot-1 Detroit native took advantage of a smaller Panther frontline to connect on two layups and hit a jump shot during the offensive burst.

“I just felt like we kind of re-energized there at halftime, came out in the second half and didn’t really have a physical letdown,” Cowles said. “We continued to push the basketball, run the floor.

“I thought we got some great touches in the paint with our post players. Keisha and LaTeira I thought really delivered and did some nice things inside.”

Owens finished with game highs in points (26) and rebounds (11).

She also went 10-of-11 for the free throw line, helping the team shoot 85 percent from the charity stripe on the game.

Mosley also had a big night inside, scoring 20 points on 9-of-12 shooting.

She said she spent the offseason working on her low-post game after averaging 5.5 points per contest in 2010-11.

“Coach Cowles and even my teammates always stress on it in practice,” Mosley said. “‘Keisha make sure you’re not traveling, Keisha watch your footwork,’ so I pay close attention to that.”

Owens said Mosley has finally completely adapted to basketball in the Sun Belt Conference after transferring from Purdue earlier in her career.

“We always mess with her about coming from the Big Ten,” Owens said laughing. “They’re beastly down there, but down here you need to calm down a little bit.”

In addition to veterans like Mosley and Owens, several freshmen got the chance to impress on Sunday in their first time in a WKU uniform.

“Playing with the seniors we have, and their energy rubbed off on all of us,” Govan said. “As soon as I got on the court, watching Keisha and LaTeira, I was energized, I was ready to go.”

The Lady Toppers will go into Saturday looking to avoid the type of start they had last season, when they went 0-5 to begin the year.

Cowles said the win Sunday provided WKU a measuring stick of how much it needs to improve before playing Towson.

“We knew that Kentucky Wesleyan was a good team,” Cowles said. “But we definitely found ourselves with some weaknesses we’re going to have to go back and work on.”