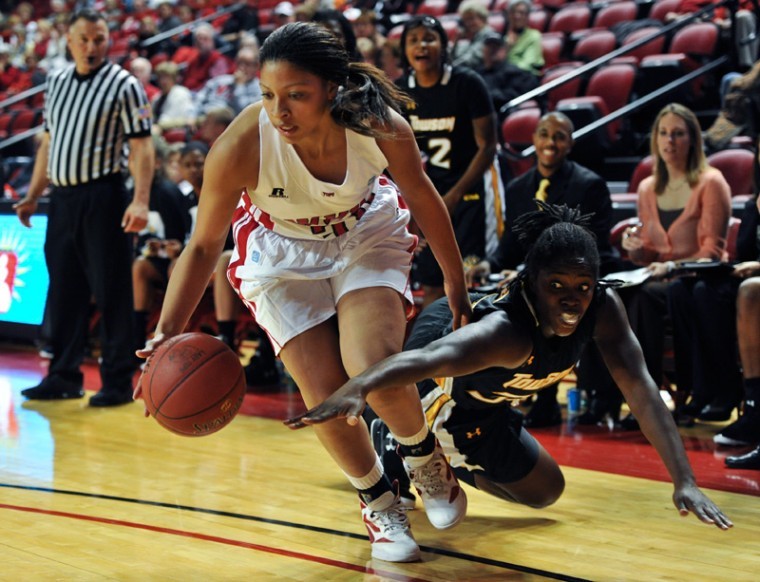 WKU's offense and Towson's defense fight for a loose ball Saturday during WKU's 67-62 loss to Towson at Diddle Arena.

The Lady Toppers experienced their first growing pains of the young season on Saturday as they dropped the first game of the regular season.

WKU (0-1) lost 67-62 at Diddle Arena in its first game in program history against Towson.

While the Lady Toppers have seven freshmen on the roster, their biggest contributions came from their seniors.

WKU saw most of its success in the post, recording 51 rebounds in the game. Mosley said maintaining under the basket is going to be key for the team this year.

“We have to stay on the boards and in the post,” she said. “I just feel like that’s a strength of ours and we need to maintain that throughout the season.”

The game was close throughout — neither team took a double-digit lead — but the Lady Toppers couldn’t pull off a run to get the win.

The Lady Toppers were tied with Towson at 52-52 after a three-pointer by freshman guard Danay Fothergill with seven minutes to go but weren’t able to work off of that momentum.

While the Lady Toppers were able to pull down 20 more rebounds than Towson, missed shots came back to haunt them. WKU finished with a 32.9 field goal percentage and 7 of 24 behind the three point line.

“We just simply did not shoot the basketball,” Cowles said after the game. “We ended up 23 for 70 from the floor, and it wasn’t just inside interior shots. We didn’t shoot well from the perimeter, and we’ve got to get that done.”

Fouls also proved to be a big roadblock for WKU. The Lady Toppers committed 26 personal fouls, including 20 in the second half.

Towson was able to capitalize on the calls by going 23 of 34 at the free throw line, where they outscored WKU by 14.

Cowles said sloppy defense by WKU is what caused Towson to get to the line so often.

“I just think we weren’t disciplined in our defense and that caused us to put them at the line so early on in the second half,” she said.

Cowles was optimistic about improving her team’s shooting.

“The good thing about that is that’s fixable,” she said. “We can get in the gym and we can get more shots up. We can do a better job shooting the basketball.”