Students learn cooking outside of classroom 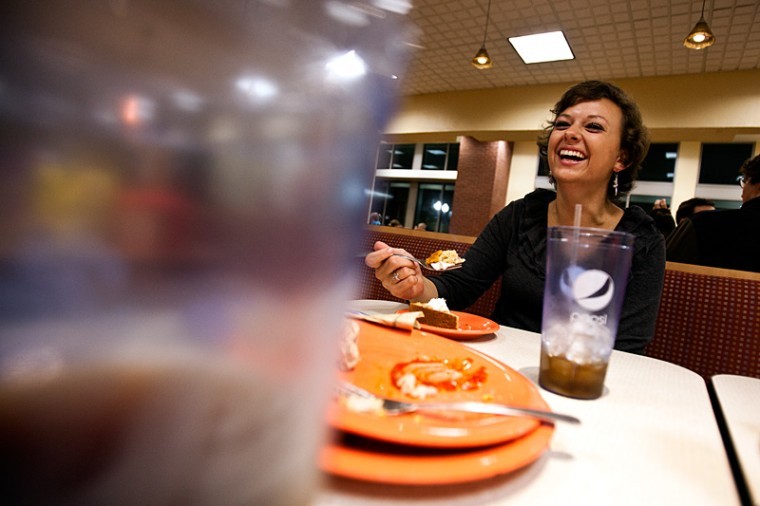 Princeton freshman Lindsey Byrd enjoys a slice of pie at The Fresh Food Company in Downing University Center. She eats out for almost every meal.

Ben Robinson said he knew he was in trouble when he saw smoke. The saucepan he’d been stirring just moments before had burst into flames, incinerating his fried rice. In a second, a simple miscalculation had become a disaster.

It was last year when Burkesville native Robinson, a 21-year-old nursing major at WKU, almost set fire to his apartment’s kitchen.

Robinson’s incident is a common story among college students. He moved out of his parents’ home and into an apartment and was suddenly left to fend for himself.

When it comes to food, Robinson had two choices. He could eat out or brave the culinary world alone. On the second route, Robinson said there were bound to be a few disasters.

“I try to be open to everything,” he said. “If there’s something new to learn, I try to go for it.”

To avoid the pitfalls of cooking, a lot of students choose to eat out for almost every meal.

Princeton freshman Lindsey Byrd is one of these. The 18-year-old music education major dines out for both lunch and dinner almost every day. She contributes her diet choices to her hectic schedule and to her lack of culinary expertise.

On an average day, Byrd attends class, goes to marching band practice and accompanies both WKU Women’s Chorus and the Bowling Green-Western Choral Society on piano.

After all of this, she said she still finds time to practice piano for about two hours each day. Byrd said there is not much time left for preparing meals, even if she had the tools and knowledge to do so.

Although she tries to eat a balanced diet, Byrd admits it can be tough to get enough fruits and vegetables.

“I probably don’t get as much as I need,” she said.

Julie Lee, an instructor in WKU’s Family and Consumer Sciences department, says that Byrd is not alone.

Lee said that most of her students barely eat any fruits or vegetables and eat out for most of their meals.

“It always scares me when they’re eating fast food two times a day,” she said.

Lee is a registered dietitian and a certified diabetes educator with an extensive history in food. She has worked as a chef around the country.

Since 2006, Lee has been teaching courses in hospitality management, dietetics, international cuisine and community nutrition.

Lee recommends that students cook for themselves at least two to three times a week. To Lee, the health benefits are clear.

“You can control fat, salt and portion size,” she said.

Lee said restaurants regularly neglect recommended portion sizes. At a typical restaurant, an appetizer, main dish and dessert can be around 1,000 calories each.

At home, Lee cooks once a week and saves the leftovers for the other six days. For example, she roasts a chicken on Saturday, packs it into plastic storage containers for the refrigerator and pairs it with different ingredients and sauces until it’s gone.

For students, Lee recommends making hardy, simple meals that can be stored for a while.

Lee said a lot of these meals can be based off a can of soup. Many soup cans include recipes for casseroles and pastas. She said these recipes are easy to cook and can taste even better on the second day.

While Lee said cooking meals can be a better alternative, it’s not always easy.

“You have to have time and initiative,” she said.

Since Robinson narrowly averted his fried rice crisis a year ago, he has taken the initiative. Through a series of what he calls “trial and error,” Robinson has taught himself to cook.

Robinson said the main thing that helped him learn was his frame of mind.

“So far all of my accidents have turned out to be great recipes,” he said.