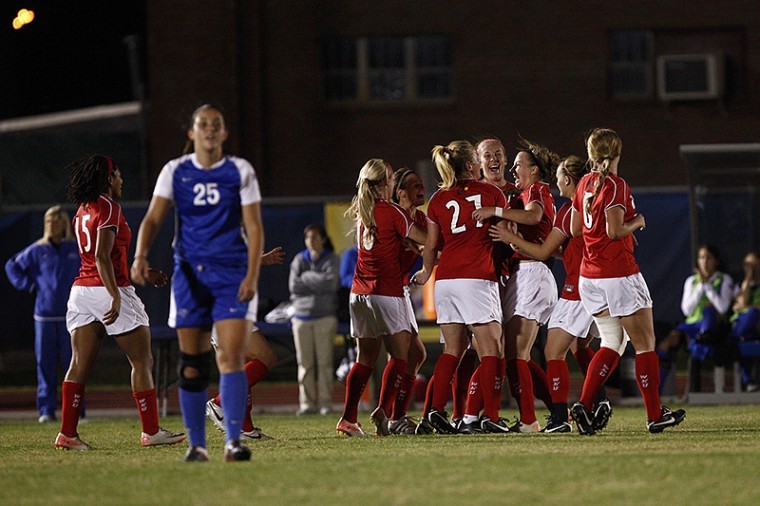 WKU's soccer team celebrates after scoring a goal during the first half of their quarterfinal match Wednesday. The Lady Toppers won and advanced to play North Texas on Thursday.

WKU needed overtime last week to defeat MTSU. In the quarterfinals of the Sun Belt tournament, senior forward Mallory Outerbridge found the net in the 18th minute to give the Lady Toppers the 1-0 victory.

WKU had several chances early in Wednesday’s match, capitalizing once to make the difference.

Junior defender Ali Stahlke took a free kick from near the sideline, playing a ball to the back post. MTSU cleared the ball to the 18-yard line, but not far enough. Outerbridge met the ball and hit a volley to the far post to give WKU a 1-0 lead.

The goal was Outerbridge’s 14th on the season, tying her with Jenna Silverberg for most goals in a single season in program history.

WKU had a couple chances with less than 20 minutes left in the period, both off corner kicks. The first, in the 17th minute, featured senior midfielder Kelsey Meyer playing the ball and Stahlke heading the ball wide.

Four minutes later, Meyer took another corner. Outerbridge played it back into the center with Stahlke again missing the frame with a header.

The Lady Toppers took the 1-0 lead into halftime, outshooting the Lady Raiders seven to one in the period.

Each team had chances early in the second half, but neither could convert.

WKU also had corners kicks 18 and 20 minutes into the half, but both were cleared out of the danger area.

Then, with less than 11 minutes left in the match, WKU was called for a handball in the box, resulting in a penalty kick.

Senior goalkeeper Libby Stout dove to her left, making the save with her foot to keep the Lady Toppers up 1-0.

WKU then got a chance on a quick counter with Outerbridge, who had the ball poked away from her in the box.

MTSU had a few chances late as they kept the ball in the WKU box, but could not get a shot off.