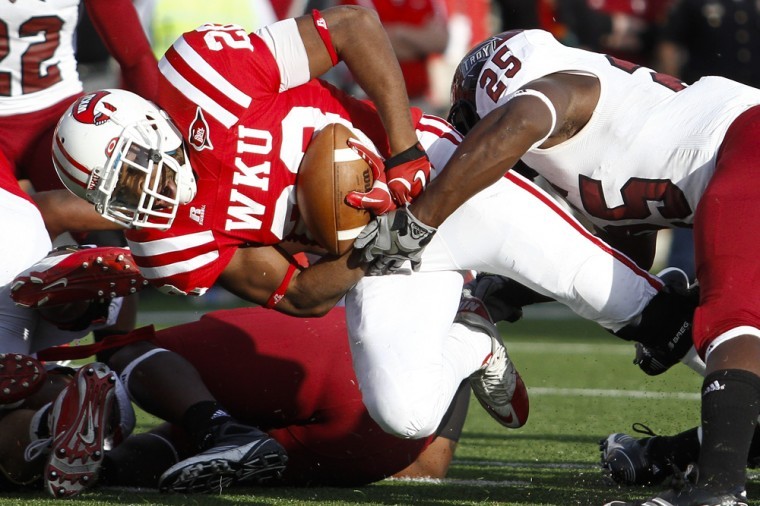 Senior running back Braxston Miller runs for his first career touchdown Saturday during WKU's Senior Day win over Troy. WKU is still waiting to hear whether or not they'll be selected to a bowl game.

Recent speculation has tabbed the BBVA Compass Bowl as WKU football’s most likely destination should the team receive a bowl invitation.

Athletics Director Ross Bjork on Tuesday said that game, played Jan. 7 in Birmingham, would be a good fit for the Toppers and their fans.

“I think Birmingham gives us the best shot because it’s a driveable distance, it’s a Saturday, it’s after the holidays,” Bjork said. “It makes a lot of sense in many ways. But at this point, we’ll go anywhere that will take us and reward our players and coaches for a job well done.”

The BBVA Compass Bowl, formerly played as the PapaJohns.com Bowl, was founded in 2006 and has direct tie-ins with the Big East and Southeastern Conferences.

Should there not be enough eligible teams from one or both of those two leagues, an at-large team could fill the vacated spot.

It’s a similar drive to the 280 miles from Bowling Green to Memphis, the site of the AutoZone Liberty Bowl.

Bjork said that close to 1,000 tickets have been reserved by fans, with a $25 flat fee.

“I think our fans have really responded in a positive way,” he said.

WKU (7-5) is one of several teams sitting in the at-large pool.

There are currently 71 teams eligible for a bowl berth, with five teams needing one win this weekend to become eligible.

The Toppers will be rooting this week for No. 22 West Virginia to beat South Florida on Thursday and No. 8 Oregon to beat UCLA on Friday.

Then on Saturday, WKU fans will be hoping for Cincinnati to beat Connecticut, Brigham Young to beat Hawaii, No. 7 Houston to beat Southern Mississippi in the Conference-USA Championship and No. 12 Georgia to upset No. 1 Louisiana State in the SEC Championship.

The more of those results that go in the Toppers’ favor this weekend, the better WKU’s chances of receiving an at-large invitation.

“Who’s going to predict those? No one knows,” Bjork said. “There’s oddsmakers and favorites in those games, but until they play out, you don’t know what’s going to happen.”

While the Toppers wait to hear on whether or not they’ll go bowling, two of their Sun Belt rivals — Arkansas State and Louisiana-Lafayette — wrapped up their bowl bids more than a week ago.

That’s a tough pill to swallow for WKU, which beat Louisiana-Lafayette by 20 points on Oct. 22, and could split the Sun Belt Championship with Arkansas State should the Red Wolves lose to Troy on Saturday.

“One of the things that we have to talk about within our league is the timing of when bowl announcements come out to protect a potential second-place team…and even a potential conference title,” Bjork said.

Head Coach Willie Taggart said his team is taking the week off to rest, waiting until they find out a bowl location before they resume practicing.

Should WKU be selected, it will be the first postseason trip for the program since moving to the Football Bowl Subdivision in 2009.

Taggart said the first-time novelty of a bowl trip, plus the Toppers’ 7-1 record over their last eight games, should provide plenty of motivation for a bowl to pick WKU.

“We’re young at this thing and it’s new to us, but it’s going to be new whenever we that first bowl game and get in it,” he said. “Why wait? Why not get us now and let us show you.