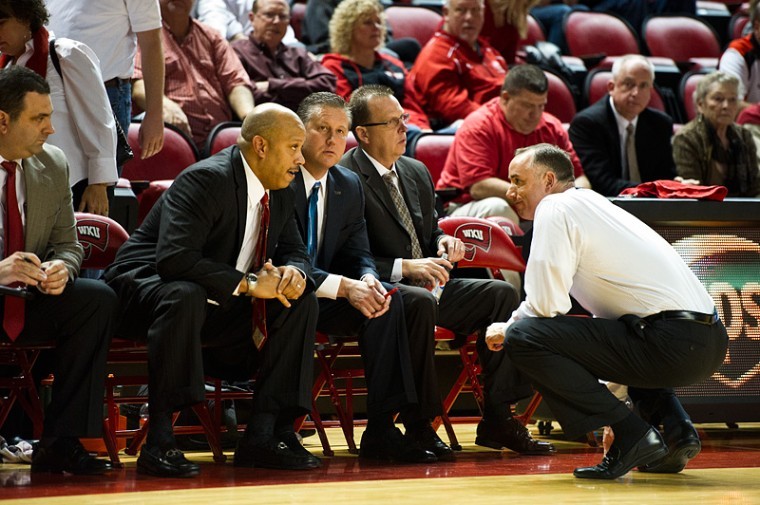 For the first time since the 1949-1950 season, WKU will face the same non-conference opponent in back-to-back games when the Toppers tip off against VCU at 7 p.m. Wendesday at Diddle Arena.

Head Coach Ken McDonald said the closest setting he’s seen to that sort of scheduling would be playing the same team at the end of the season and then in the first round of the conference tournament.

Even then, teams have several days to prepare — not just two, like WKU (1-4) and VCU did after playing in the seventh place game at the Charleston Classic on Sunday.

But McDonald has no problem with it.

“I like it,” he said. “We’re playing good basketball teams right now. “They’re going to have to come in here and I’m sure they’re going to want to make their adjustments with how the game went. We’re going to do the same. We’ve got to have a little more effort to get us on the positive side.”

VCU, last year’s surprise Final Four team, got the better of WKU in the last meeting.

After WKU led by 12 with nearly eight minutes left, the wheels fell off for the young Topper team. The Rams went on a 25-8 run to close out the game and leave with a 69-64 win, handing WKU its third straight loss.

McDonald said that was the best basketball he’s seen his team play this season, but even that resulted in a loss. So there are plenty of adjustments that were made in practice this week in preperation for the same team, he said.

“Our spacing was bad. We have to continue to move the ball,” McDonald said. “I thought VCU did a good job of scrambling on defense. We have to get the ball to the other side and really move the ball. I think we could rebound better on the defensive end. I think we can hurt them on the offensive glass.

“Those are things — now that we’re getting more guys in the mix that our depth has to be a factor.”

WKU welcomed back freshman forward George Fant and freshman guard T.J. Price on Sunday after they sat out the team’s first four games for an NCAA violation.

But while the Toppers got two players back, they left the game with two less available players.

Then, in the second half, sophomore forward Kene Anyigbo went to the bench with what McDonald said were chest pains and shortness of breath.

McDonald was uncertain on Anyigbo’s availability for Wednesday’s game, but said he’s hoping Fant can be more of a presence in the post.

Fant finished with four points — all free throws — and three rebounds in 13 minutes of play in Topper debut.

“I think George had the first-game jitters and he’ll be, I think he’ll be, better in this basketball game,” McDonald said. “I think guys will settle down. Those are the things that we definitely want to take advantage of.”

“They try to disrupt you and we have to make sure we play a little more patient basketball and definitely keep them off the glass,” McDonald said. “You know the other team can only pick up their aggression level both in a trap situation and on the offensive glass. That’s what got them that win the last time out.

“No matter how the run is, whether we’re making a run or VCU is making a run, we want to continue to improve on how to handle it.”