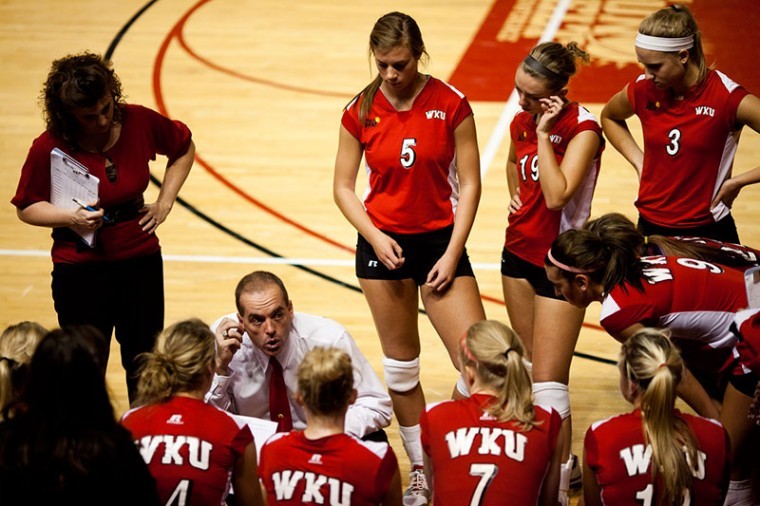 At 14-1 in Sun Belt Conference play, WKU and Middle Tennessee will play for the league's regular-season title Friday night in Murfreesboro, Tenn.

for weeks about making the last volleyball match of the season

Hudson definitely got his

at 7 p.m. Friday in Murfreesboro in the last regular season Sun

Belt match either team will play, and a lot is on the

East Division. The winner of Friday’s match will be crowned

regular-season division and conference champion and will receive

the No. 1 seed in next week’s Sun Belt tournament.

Despite the stakes, senior middle

just another match against their biggest rival.

“It’s always that rivalry that we’re

striving to get a win in,” she said. “It would definitely be

WKU dropped a match against MTSU

the Lady Toppers this season.

In fact, MTSU has had the Lady

Toppers’ number on the court for the past few years. WKU hasn’t

gotten a win over the Lady Raiders since 2008, when Williams was a

Rogers has yet to beat MTSU in her time in Bowling Green. She said

tonight’s match is a perfect opportunity to notch her first

We haven’t beaten them in a couple of years,” she said. “Just the

Hudson said despite WKU’s lack of

success against MTSU in recent years, he’ll be looking past the

rivalry between the two teams in tonight’s match.

championship, and I don’t care who’s on the other side.”

MTSU comes into Friday riding a

champ and have the No. 1 seed in the Sun Belt

Hudson said the stakes should bring

a big home crowd to the match in Murfreesboro.

we always play really well down there,” he said. “I think we play

them better down there than we do here in Diddle Arena, for

whatever reason, so I don’t think our kids will be bothered or

“We just have to stay focused the

whole time,” she said. “Their fans are going to be rowdy and trying

Hudson said the Lady Toppers will

will have more on the line.

“I’d rather be on our sideline than

theirs on Friday night,” he said. “The boring regular season

kids from here on out.”