Student interns promote Reduce Your Use contest at WKU 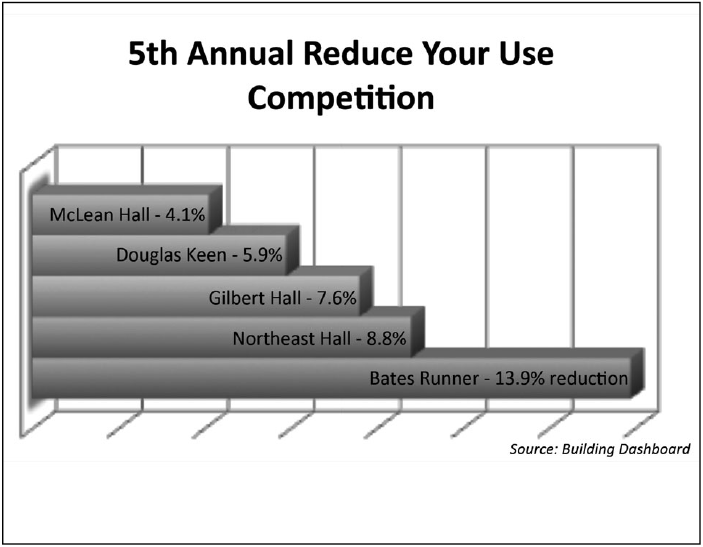 Reduce Your Use results

The Green Campus Network Program and Reduce Your Use collided last month to increase sustainability and energy awareness.

The month, promoted and run by Green Campus interns this year, is framed around the Office of Sustainability’s competition among dorms to determine which can reduce energy the most from Oct. 3 through Oct. 31.

Bowling Green junior and Green Campus Intern Ashley McCloughan said many of the interns saw October as their best chance so far this year to reach students.

“As Green Campus interns, it’s our job to promote efficient energy use on campus, so Reduce Your Use kind of gave us the perfect opportunity to educate people on how they could reduce their use,” McCloughan said. “We created flyers, we sent out emails, and we tried to partner with as many different sustainable causes on campus as we could.”

McCloughan said Housing and Residence Life was one of the biggest sustainable partners. Bates-Runner Hall won the Reduce Your Use Competition this year and received an ice cream social with President Gary Ransdell.

Jeff Long, hall director for Bates-Runner Hall, said he couldn’t account for the sudden decrease in energy use but that it inspired many of the residents.

“Once we jumped into the lead, it was sort of like, ‘Hey, we’re in front. Let’s not let anybody overtake us,’” he said. “I think once the students saw we were leading, they really took charge.”

But the month was about more than just turning off lights and unplugging unused outlets, said Cody Wooten, a Glasgow junior and a Green Campus intern.

“Our main focus was to get the students more informed and educated,” Wooten said. “We try stuff like dinners and scavengers hunts to try and get other students involved.”

McCloughan said she hopes to see Reduce Your Use grow even bigger next year.

“UK and U of L actually already challenged us to a campus competition this year but we didn’t want to take it on because we wouldn’t have had enough time to promote it and get everything ready,” she said. “We might try to tackle that next fall. We don’t know yet.

“We’re trying to gauge if students would be up to taking on UK and U of L to reduce their use against them instead of doing the dorm or possibly on top of that.”