WKU looks to beat ‘the man’ 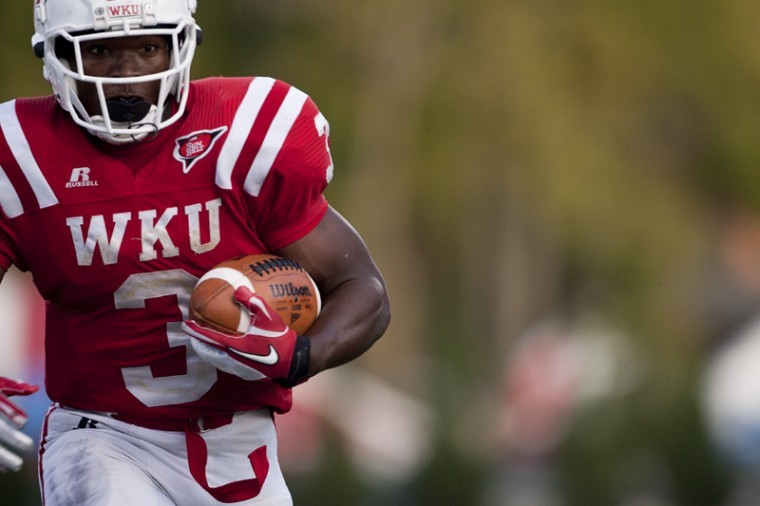 The No. 1 and No. 2 teams in the nation are meeting Saturday in Tuscaloosa, Ala., — not in Bowling Green.

But with the way both WKU and Florida International Head Coaches Willie Taggart and Mario Cristobal have described each other’s teams, some may be led to think this Saturday’s Topper-Golden Panther matchup — not than Alabama-LSU — should also be billed as “Game of the Century” material.

“They’re better than anyone we’ve faced, and that’s a fact,” Cristobal said earlier in the week of the Toppers.

Not to be out-complimented, Taggart channelled his inner “Nature Boy” in describing Cristobal’s squad, the defending Sun Belt Conference champs.

“Like Ric Flair said, ‘In order to be the man, you’ve got to beat the man,’” Taggart said. “We all know FIU is the man.”

National media has claimed Saturday’s showdown between the BCS No. 1 Tigers and No. 2 Crimson Tide as a potential elimination game for national championship considerations. WKU and FIU’s 3 p.m. meeting the same day in Smith Stadium may serve similar purposes in terms of the Sun Belt race.

The Toppers currently sit third in the Sun Belt with a 4-1 league record.

They trail, yet are within striking distance of both first-place Arkansas State and second-place Louisiana-Lafayette.

Meanwhile the Golden Panthers sport a 2-2 league record and sit fourth in a conference they were picked to win during the preseason.

Because Arkansas State and ULL hold tiebreakers over FIU, a Golden Panther loss Saturday would likely end any chance of making those summer predictions a reality.

Senior running back Bobby Rainey said he’d be just fine with that.

“We want to be the best in our conference, and like I said, be the Sun Belt Champion,” Rainey said. “That’d be a good job, going out there and whooping the champion.”

In order to “whoop” the Golden Panthers, WKU will likely need to find a way to contain speedy FIU receiver T.Y. Hilton, the defending Sun Belt Player of the Year.

Hilton has already made his mark on the Commonwealth once this season, catching seven passes for 201 yards and two touchdowns in a Sept. 9 win over Louisville.

Junior safety Kareem Peterson said his spot will be especially critical in preventing Hilton from getting free in open space.

“They’re going to look for a weakness and try to get him against some of the safeties, which I’m up for the challenge,” Peterson said.

While the league implications of the game take center stage, Saturday will also mark the first time WKU plays at Smith Stadium since breaking an 18-game home losing streak Oct. 22 against ULL.

That win was the third in the Toppers’ current four-game win streak.

The recent success has given rise to a weeklong athletic department campaign to fill Smith Stadium’s 22,113 seat capacity Saturday.

Peterson said WKU treats each week like it’s the “biggest game in school history” but said the FIU matchup is one of the most important he can remember.