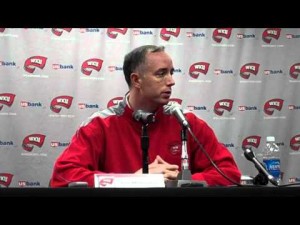 Head Coach Ken McDonald knows there are many question

marks on this year’s team.

how the seven newcomers will adjust to the college game.

one thing that he’s sure about.

energy and enthusiasm about how they’re playing,” he said. “This

team will have an identity that they play hard. When people walk

away they’ll see a team competed for a long period of time.”

That’s one of many differences McDonald said he sees

in this year’s team.

Another difference, and perhaps the one that McDonald

and the players have spoken the most about, is team chemistry.

McDonald promised major changes for this season and

said he’s starting to see that in practice, with the chemistry

being at the forefront.

“When you have a new group, there’s always going to

be a challenge making sure the chemistry is right,” he said. “We

just haven’t had anything but positive energy with this group.”

something different with this year’s team when it comes to

“Everybody just embraces each other,” he said. “We’re

like a family. Being with these guys is fun. Last year it just

WKU’s first chance to showcase that in a game setting

Diddle Arena in its first exhibition game of the season.

McDonald said he has an idea of who will start, but

he wasn’t ready to announce that on Wednesday.

being consistent throughout practice so far. Those freshmen are

Fant and Price have both gotten in better shape, with

Price slimming down from roughly 255 pounds to 210 pounds, McDonald

Gordon was described as a player who “is always

trying to do the right things” and McDonald praised Snipes’

consistency and athleticism, calling him a “surprise” early on in

“That doesn’t mean the other freshmen aren’t playing

well, but those four have separated themselves,” McDonald said.

WKU was tabbed to finish third in the Sun Belt East

and saw no players selected to the all-conference teams.

Saturday’s game will be the first opportunity for the

Toppers to prove their doubters wrong, but McDonald said all he’s

looking for is “all-out effort.”

“I want the carry-over on the defensive end. I want

the carry-over in terms of the teamwork on the offensive end,” he

said. “You’ll hear us talk about teamwork, pride and toughness.