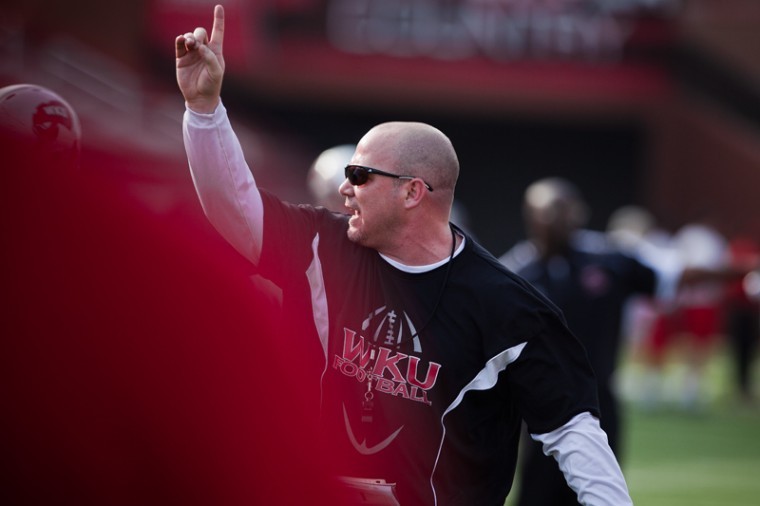 Editor’s Note: The charges against Lance Guidry of DWI, improper lane usage and reckless driving were expunged under a court order dated Sept. 12, 2014.

Defensive coordinator Lance Guidry met with Athletics Director Ross Bjork and Head Coach Willie Taggart Sunday night — a day after he was arrested in Baton Rouge, La., for driving while intoxicated — to discuss what punishments he would face.

Taggart called it “a nice disciplinary action” for Guidry.

“Lance agreed to them, which he had to,” Taggart said. “We feel like they’re stern enough to deal with what we’re going through. He understands that it’s unacceptable.

“There’s zero tolerance from here on and our entire staff understands that this cannot happen again to our football program.”

Bjork met with reporters Sunday and said that Guidry will coach in WKU’s remaining two games against North Texas and Troy.

He said the details of Guidry’s punishment wouldn’t be publicized, but suggested it could be either a pay cut or a limit on out-of-state recruiting.

Guidry, a Welsh, La., native, rented a car from the Baton Rouge airport and went out Friday night to watch a high school game and do recruiting.

He came back afterward to the team hotel and performed his standard “bed check,” in which he and the other coaches make sure the players are in bed by curfew. That typically happens around 10:30 p.m., Bjork said.

From there, coaches are told to “be smart.”

Guidry then met with a friend at the hotel and went to a nearby restaurant.

Local police officers were in the bar in which Guidry was drinking and saw him get in his car and drive, Bjork confirmed. Guidry was then pulled over about a block from the establishment.

An officer put Guidry through a field sobriety test, which he didn’t pass.

Guidry was arrested at 1:03 a.m. Saturday morning, the affidavit says.

He was booked into the East Baton Rouge Parish Prison at 2:51 a.m. on one count of second-degree DWI and improper lane usage, according to the affidavit.

Bjork said he was unsure who posted the bond money for Guidry and suggested it could have come from a family member or a friend given Guidry’s close ties to the area.

Bjork also confirmed that Guidry was not wearing any WKU attire at the time of his arrest.

News of Guidry’s arrest broke Saturday during the Toppers’ game against Louisiana State.

WKU Associate Athletic Director Todd Stewart said Saturday that WKU had no comment and that Guidry would not be made available for comment after the game.

That was by design, Bjork said.

“It had to be about the players and the game — taking on the No. 1 team in the country, which we’ve never done before,” Bjork said. “This could not, and we were not going to let it be, a distraction. Even though it was circulating out there, the right thing to do was just to say, ‘You know what? We’ll deal with this when we get back.’ That’s what we decided to do.”

Players were not told of Guidry’s arrest before or during the game, Bjork said, citing once again the desire to keep the focus on the game.

Bjork suggested that not telling players about Guidry’s arrest didn’t send any sort of mixed messages.

“If at one o’clock in the afternoon, we would’ve pulled Lance off the sideline, to me that would have been more detrimental to the team and their psyche than it was sending the message on the discipline,” Bjork said. “Lance’s discipline should not affect what the team does and how they respond.”

So, instead, players were told after the game.

Senior linebacker Ben Duvall said he felt like Guidry “did a good job of taking responsibility, letting the team know up front what happened.”

“We love Coach Guidry,” Duvall said. “He’s done a lot for our defense, he’s brought a lot of energy to the team and I’m sure moving forward we’re just going to prepare the same way we’ve always done. He’s going to coach just as hard as he’s ever coached.”

“I know coach Guidry’s an awesome coach,” he said. “I know how much respect he has in the team and he’s always had my back so I’m going to have his back.”

Along the lines of mixed messages, the way Taggart and Bjork handled Guidry’s discipline brought up questions about whether the punishment was consistent with previous punishments handed down to players.

Earlier this season, sophomore running back Antonio Andrews was suspended one game for sending a tweet directed to WKU fans that Taggart deemed negative. At the time, Taggart said, “that’s rule No. 1, he violated our rule. We don’t do that.”

Despite Guidry being allowed to coach the day of and the remaining two games after his DWI arrest, Taggart said he didn’t think it sent a mixed message.

“I think every situation is unique,” Taggart said. “We deal with them all separately and differently depending on what goes on. Good thing is, Coach Guidry was up front and everything.”

Taggart also had a reply to those who might have suggested that Guidry be fired.

“If they were the head coach, maybe they’d do that,” he said. “I did what I felt was best for this football program, this team and this university. I stick by my decision.”

The affidavit states Guidry has been arrested twice before for DWI, in April of 1990 and September of 2003.

The first came when Guidry was in college and the other, in 2003, was too far back for Bjork and those who hired Guidry to notice when they did their standard background check. Federal law only allows a seven year window for background checks, Bjork said.

“If he got that in September of 2003 and we do our background check in early February of 2011 when he was hired, it doesn’t catch that,” he said. “We’re going to work with Lance on the next steps in helping him in any way we can. He’s part of our family. He knows he made a big, big time mistake that can serve as a distraction to our program.

“We’re going to work with him on making sure this doesn’t happen again. Frankly, we can’t allow it to happen again.”

In the aftermath, Bjork said he looked at “every option” regarding Guidry. That included possible termination, suspension or holding Guidry out of Saturday’s game.

Taggart indicated on Monday that Guidry would remain a coach at WKU going forward.

“He’s coaching this week. He’s part of this staff,” he said. “We’ve said what’s done and that’s what’s going to be done.”

Bjork released a statement Sunday afternoon and said Guidry met with him and Taggart prior to Saturday’s game to tell them of his arrest and the details of the night before.

Bjork said Guidry’s story matched that of the public police report, which was another reason why Guidry was allowed to coach Saturday.

“Because of Lance’s contriteness and honesty after the arrest and the information we gathered, it was decided that he would coach the game,” Bjork said in the statement.

Taggart said in a statement on Sunday that Guidry’s actions “were not consistent with (WKU’s) value system” and “how we must operate.”

On Monday, Taggart said those actions could lead to a curfew for coaches when the team plays road games.

“I think whenever a situation like this comes up, you learn from it and try to make things better so they don’t happen again,” he said. “When we go on the road, we’re going there for one reason and that’s to win a football game. It’s a business trip. Everybody’s in the hotel and everybody’s going to stay in the hotel.

“When guys go out recruiting they’re going to come back to the hotel and be there and locked in to the job that’s at hand, and that’s to win.”

Guidry was not made available on Sunday or Monday for comment on the situation.

But Guidry released a statement on Sunday in which he took full responsibility for his actions Saturday.

“I would like to apologize to my family, our players, coaching staff, administration and fans for the undue attention my poor judgment has caused,” he said. “Our football team put forth a tremendous effort against the nation’s top ranked team, and I have done a disservice to our entire program by shifting the focus away from where it belongs. I accept full responsibility and the consequences for my actions.

“I can assure everyone associated with our program that I have learned from this and it will never happen again. I will do everything in my power to gain back the trust and confidence from those I have let down. It is an honor and a privilege to be a Hilltopper, and I will prove that more than ever moving forward.”