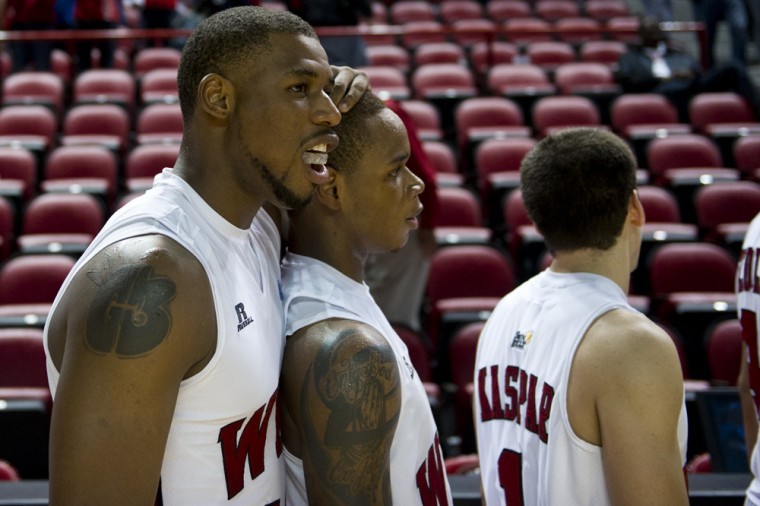 Freshmen Derrick Gordon and Nigel Snipes both said they felt jitters when they took the floor for the first time in a game setting at Diddle Arena on Saturday night.

Snipes posted a double-double while Gordon led all scorers with 17 points in WKU’s 73-61 exhibition win over Xavier (La.).

“First college basketball game — I believe every freshman goes through it. I had butterflies,” Gordon said. “But once I got my first bucket and getting the crowd involved, I fed off the crowd.”

Likewise, the Tops started off slowly. Xavier hung with WKU midway through the first half before a Snipes dunk gave the Toppers a 35-25 lead with less than eight minutes to play.

The Toppers never trailed the rest of the way, but Xavier started to make a run with just under seven minutes left in the second half. After trailing 57-41, the Gold Rush cut the lead to 59-50 with 6:26 to play.

Head Coach Ken McDonald said overall he was pleased with his team’s performance, but noted that they still have “a long way to go.”

“You saw some guys, you saw some bright spots, some lulls,” he said. “It was kind of like a typical first game. I think our veterans had some moments, but I want a little more consistency from them.

“The young guys have to learn how to manage a game, especially at the end.”

Snipes scored 11 points and grabbed 11 rebounds while Price had 12 points. Fant tallied seven, but McDonald said he should have had a lot more had he not missed several easy shots near the basket.

“The young buck was crying about getting fouled and you’re breaking Xavier’s heart,” McDonald said. “You can’t think that at this level, you’re going to get those touch fouls in the post. He’s got to finish.”

WKU shot 41 percent from the field but was just 23.5 percent from three-point range on 4-of-17 shooting. The Toppers were also out-rebounded 39-33, which McDonald said would be a point of emphasis in practice this week.

Ten of 11 players who played scored.

Senior guard Kahlil McDonald said overall the offense executed well, but could still use some work. The focus Saturday night was on defense, he said.

“Defense is going to bring offense,” he said. “We play D, it makes the offense easier. But we’re there for each other. We’re a band of brothers. We’re going to play hard and it’s going to trickle right down the line.”

Sophomore forward Stephon Drane and junior guard Caden Dickerson both sat out Saturday. Drane is still recovering from a hyper-extended knee while Dickerson was nursing a sore shoulder.

McDonald said he hurt it in practice earlier in the week.

“He had a play where he stretched back and felt a little pull on his shoulder,” he said.

Dickerson is expected to be back in practice this week and ready for WKU’s game vs. St. Joseph’s on Friday.

Gordon and Snipes both said it was “fun” to finally take the court in front of the fans.