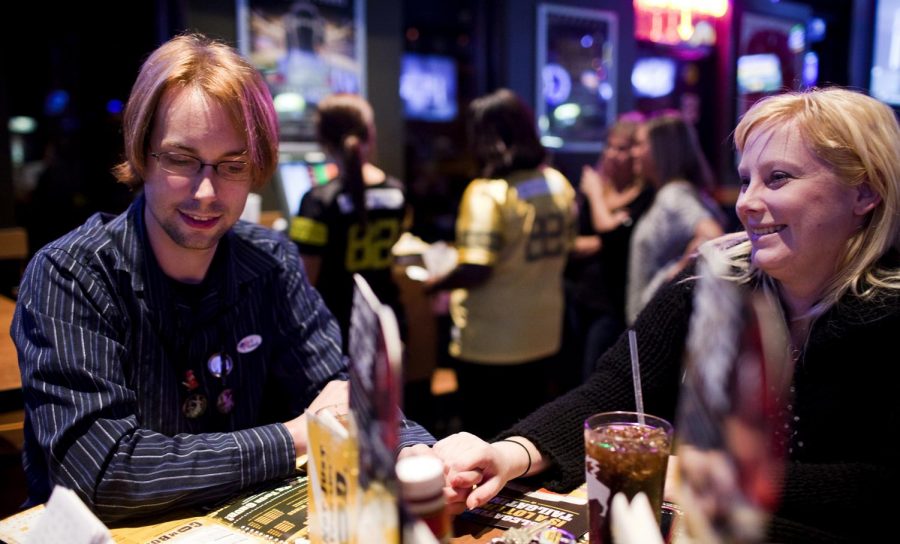 When Brandon Peay learned that he had lost the race for mayor of Bowling Green, he was not surrounded by family and friends. Instead, he was in his car, checking WBKO’s website on his cell phone.

“I can’t even tell you what I was thinking when I first found out,” Peay said. “I don’t even remember what was going through my mind.”

The Bowling Green sophomore missed the official release of the results while in a night class. He later met his girlfriend, New Orleans senior Kristina Thames, and a coworker at Buffalo Wild Wings to celebrate the race.

Both Peay and Thames sported “I Voted” stickers. Thames held hands with Peay as a sign of support throughout the night. Although he lost, Peay said that given the chance, he would do it all over again.

“Honestly, it’s a good experience,” he said. “I’m glad I had this opportunity.”

Peay received 266 votes, which was about 3 percent of the total votes cast. He ran against incumbent Mayor Joe Denning and city commissioner Bruce Wilkerson, who won the race with 57 percent of the votes.

While he isn’t sure that he will run in 2012, Peay said that he will definitely run for political office again in the future.

“[Politics] aren’t really my future, per say, but I want more along the lines of what Rand Paul has — a normal four year term, not a career politician,” he said. “That’s what’s wrong with Washington right now. We have career politicians who don’t want to change their policies.”

Rand Paul, a Republican U.S. Senator from Kentucky, is currently in the first year of his six-year term.

Despite the loss, Peay said he will keep his dream of being mayor alive. If elected to mayor in the future, and if he liked the job, Peay said that he would consider possibly running for a higher office.

Although he doesn’t want a career in politics, Peay would like to continue pursuing a nursing degree and do something with it in the future.

“As a nursing major, I want low cost health care for individuals who may not be able to afford it,” he said.

Thames said that she is also glad Peay had the experience of running.

She also helped out with his campaign finances.

“I made him get window chalk,” Thames said. “Actually, I bought it for him.”

The $6 spent on window chalk, along with the $50 entrance fee for the election, was all Peay spent on his campaign. He decorated his car windows with the chalk, but said that he also used social media to get his name out.

Peay said that his lack of experience was probably a contributing factor to the loss. However, he said he has no regrets and wishes Wilkerson luck as the city’s next mayor.