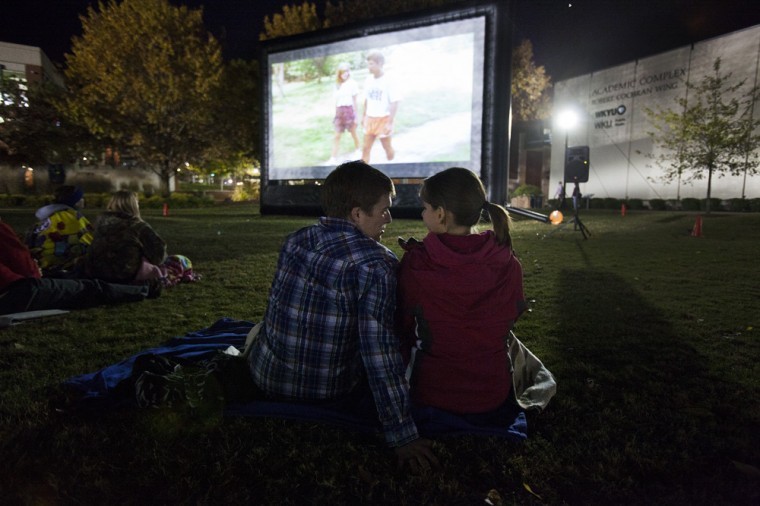 The 20th anniversary edition of “HauntedWeen” premiered tonight on WKU’s South Lawn. Students and other viewers relaxed on the lawn, wrapped in blankets, and watched the free showing of the movie on the 34-foot-wide and 22-foot-tall outdoor screen.

The movie was released in the summer of 1991 but never had a premiere. Instead, it went straight to VHS. HauntedWeen went directly to video stores with a promise that if it did not rent, they would buy it back. None of the 2,628 nationally distributed copies were returned.

The film’s director, Doug Robertson, a WKU alumnus, presented the film, and gave a brief introduction on the fun he had making the movie, some of which was shot on WKU’s campus.

“Playing it here tonight is a thank you to Western for letting us use their facilities,” Robertson said.

Robertson had the screen and knew people were always trying to find events to go to on Halloween. He figured this would be a great time to show the movie.

A spoof of horror film “Halloween,” “HauntedWeen’s” Eddie Burber is not allowed to work in the family’s haunted house, The Burber Haunted House.Upset, Burber sneaks into the house and ends up killing a young girl. Eddie and his mother then go away to live in the woods. Twenty years later at Tophill State University, a fraternity, Sigma Phi, uses the abandoned building as a haunted house to fundraise to remain a national fraternity. As the students prepare the house, they strike horror and people begin to die.

Originally from Bowling Green, Robertson attended WKU from 1982 to 1986 and graduated with a bachelor’s in Television and Film Production. Soon after graduation, Robertson moved to California hoping to get involved in the movie business. He returned to Bowling Green in the summer of 1989 to film “HauntedWeen” on WKU’s campus and areas of Bowling Green.

Robertson said WKU was great for letting the crew use campus facilities to make the film. WKU allowed the crew to film in some dorms, and footage was also shot in the old Sigma Alpha Epsilon fraternity house on College Street. Students and professors of the late 80s helped with the film, including professors Cory Lash, Bart White, Steve Probus and Steve White.

“We wanted to show people in California we could make a movie beginning to end,” Robertson said, “A lot of people start movies, but don’t finish them.”

Lawrenceburg freshmen Kendra Hutchens came out to see the movie.

“It’s good they keep it going in town,” Hutchens said “It shows that the school is represented out there.”

Robertson lived in California for 20 years and returned to live in Bowling Green four years ago. After the movie release, Robertson decided that although making the movie was fun, the movie business was not for him and instead began a career in medical sales.

His movie career may be in the past. However, the movie is finally available on DVD.

According to a WKU press release, the DVD will include: the original movie, trailer, documentary on “The making of HauntedWeen,” producer and director commentary, photo album, HauntedWeen song by local artist Ernest Raymer and scene selections.