Notebook: WKU falls in first ever game against nation’s No. 1 team 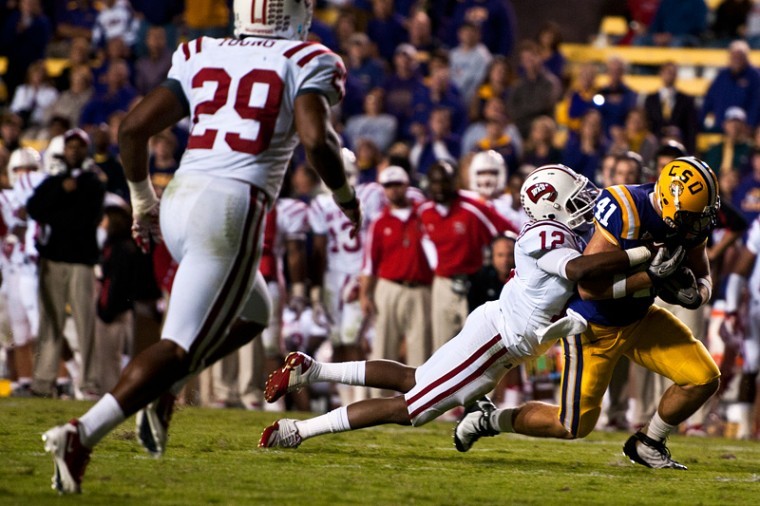 The Toppers hung with LSU during the first half, taking a 7-7 tie into the second quarter.

But the Tigers pulled away in the second half to win by the final score of 42-9.

Senior cornerback Derrius Brooks was involved in LSU’s first score, as Jefferson put a 59-yard touchdown pass into the hands of wide receiver Reuben Randle after he ran by Brooks.

Brooks said that despite the Tigers’ talent, he was frustrated with the outcome.

“I think they’re a pretty good team,” he said. “I mean I think it could’ve been a closer game if we didn’t have as many missed tackles or had blown coverages.”

The loss snapped a five-game winning streak for WKU that dated to Oct. 6.

Still Miles said he was impressed with the Toppers’ performance.

“Coach Taggart and the Western Kentucky team played extremely well,” said Miles, who notched his 100th career victory Saturday. “Western Kentucky proved that they could throw some wrinkles at is that we did not anticipate.”

Jefferson the QB for LSU

LSU Head Coach Les Miles has employed a two-quarterback system with Jarrett Lee and Jordan Jefferson ever since Jefferson returned from a four-game suspension to open the season.

But Saturday it was all Jefferson, as the senior made his first start of the season and took every snap of the first three quarters for the Tigers.

Miles said it was “a game decision” to go with Jefferson over Lee.

“We kind of liked how Jefferson played in the last game (against Alabama),” Miles said. “I felt like he had an extra comfort.”

Jefferson finished 8-of-14 for 168 yards and one touchdown. He also ran five times for 20 yards.

Lee, who played only in the fourth quarter, was 2-of-4 passing for 15 yards and a touchdown and ran once for 15 yards.

Taggart said he wasn’t surprised Miles chose to go with Jefferson instead of Lee.

“I felt like for them to produce a lot of offense, Jordan gave them the better chance because he can run the ball too,” the second-year Topper coach said. “I was telling our guys that they can expect Jordan to play.”

• Senior defensive end Jared Clendenin served as the team’s defensive captain Saturday. Taggart said earlier in the week Clendenin may be out for the year with a broken pinkie toe.

• Senior running back Bobby Rainey finished the night with 85 yards on 28 carries, the second highest total against the LSU defense this season. He also passed Adrian Peterson on the NCAA career rushing list, and has 4,101 yards for his career.

• Taggart’s record as WKU coach falls to 7-15, while Jakes’ record as starting quarterback now stands at 7-23.