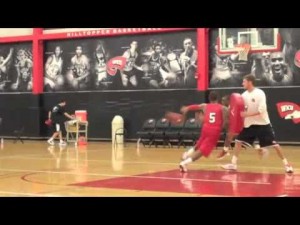 The Toppers didn’t have much time to relish the fun and games of Friday night’s Hilltopper Hysteria.

WKU held its first official practice Saturday morning, and the mood was quite the opposite of what they experienced in Diddle Arena just a night before.

Head Coach Ken McDonald’s voice was hoarse long before the practice was even over as he tried to get this year’s version of the Toppers — a team that features seven freshmen and two junior college transfers — in shape for their first game on Nov. 11 against St. Joseph’s.

“It was intense,” freshman guard Derrick Gordon said. “It’s a lot different from high school — more physical and stuff like that. But overall it was real good.”

The team spent much of the time working on offensive drills and implementing offensive and defensive sets in what was its first of two practice sessions on the day.

Later on, while the guards worked with assistant coach Lawrence Brenneman, assistant coach Jake Morton was working with freshman Vinny Zollo and Teeng Akol on their post games.

McDonald spoke heavily to his team about being tough — both physically and mentally. He was displeased with the players’ efforts early on in practice and told them they were “setting themselves up to be a soft team.”

He said putting a fire under his players like that is important on the first day of practice.

Freshman forward George Fant said he was prepared to see a different side of the coaches once practice started than he saw when he was being recruited.

“They’re going to love you a lot before you get here, but once you get here it’s a different story,” he said. “But it’s also a good thing. It’s just elevating our game to a new level and be ready for college basketball.”

The players responded with the type of effort that McDonald had hoped for.

They ran a layup drill where they sprinted down the court after receiving a pass from an assistant coach and collectively made 85 straight without missing any.

“It’s important that when we are in tough games and when we get a little tired, that we get that mental toughness to finish games,” McDonald said. “That’s any coach, any team. We’ve got good numbers, so we should be fresh — a little more than the average team. I want everybody to contribute and understand they’ve got to come in with a lot of intensity and understand jus how hard they need to play.”

It won’t get any easier next week. McDonald said practices will start at 5:30 a.m. every day because of the players’ class schedules.

McDonald looking for veterans to lead

It’s no secret that this year’s team will be made up mostly newcomers.

But from the few upperclassmen that remain, namely senior guard Kahlil McDonald and junior guards Caden Dickerson and Jamal Crook, McDonald is looking for leadership.

“I’m looking for these veterans to really take over and make this their team and show the young guys the way because they just haven’t been here,” he said. “I want some of these young guys to step up and I think they will.”

He said it’s tough for Kahlil McDonald, who will be sidelined for several weeks with a grade two medial collateral ligament sprain, but challenged him to lead and be vocal from the sidelines.

Dickerson said he the other upperclassmen are ready to take on that leadership role.

No nerves for newcomers on first day of practice

Once it finally did, there were no jitters or anxiousness — just basketball.

“There was a lot of build up. It just made it even more fun. Our first workout was really intense. We overdid everything, overthought everything. But we were so ready for this practice and now it’s here.”

Gordon said the only time he felt nerves was when he first walked in front of the crowd at Hilltopper Hysteria.

But on Saturday, he and the rest of the newcomers are just ready to play.

“We’re hyped — all seven freshmen,” he said. “We’re just ready to get on the court. The season is here and I’m just ready. “It’s all about business. It was real fun to take the court with those guys.”

And with any team with mostly newcomers, McDonald said he expected their to be a couple hiccups during their first practice.

There were, but nothing that McDonald seemed too worried about.

“The intensity level was good,” he said. “Guys came with a good attitude. We hit a little speed bump in the middle, which is expected. Once we got tired, I think it’s kind of my job, and our job, to get them through that wall.

“It was nothing unusual with this kind of group with a lot of new guys in the fold. But I was very pleased.

Chemistry at an ‘all-time high’

McDonald and players spoke after Hilltopper Hysteria about the chemistry that’s been formed with this year’s team, and that talk continued on Saturday.

In practice, if a player messed up or fell down, someone was there to pick him up — literally and figuratively.

Dickerson said that’s just the make-up of this year’s team.

“We’re at a 10 right now. Our chemistry is at an all-time high right now,” he said. Everybody’s getting along. It’s always been like that. Any time a teammate’s struggling, you want to help him out and bring him up.”

McDonald said the whole staff notices the chemistry now, but said that will be a challenge once the minutes are divided up.

“They’re used to being the big fish in the little pond,” he said. “It’s a little different now, but they like each other. They’re fun to be around. They’re encouraging each other and that’s part of being a good team.”

Anyigbo sits out on Saturday with knee injury

A day after he drained two three-pointers in a 10-minute scrimmage, sophomore forward Kene Anyigbo wasn’t participating in practice.

“He’s getting checked out,” McDonald said. “We’re going to be very cautious with him and make sure he’s right. We should know in the next couple of days.”