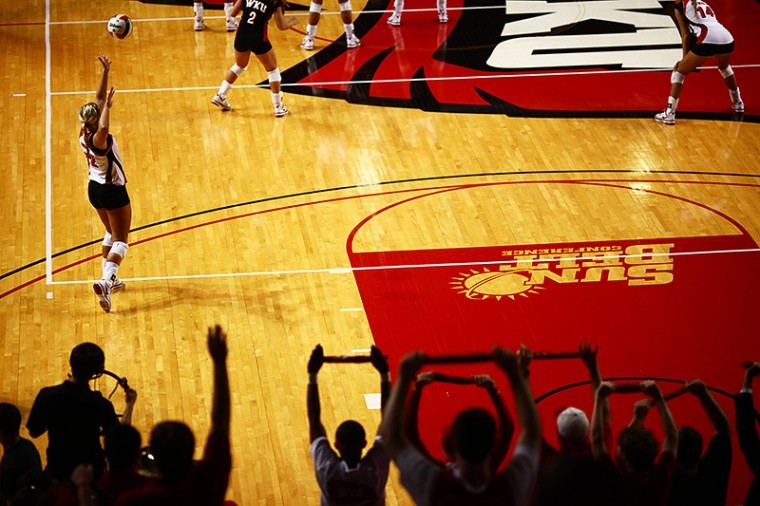 Athletes on the WKU volleyball team might hold a grudge against Cincinnati after losing twice to them last season.

But WKU’s struggles against the Lady Bearcats go back much farther than 2010. The Lady Toppers have lost to Cincinnati every season since 1999.

“They’ve been a massive thorn in our side for several years,” Head Coach Travis Hudson said. “It’s really not a mental thing as much as Cincinnati fields an excellent volleyball team every year and this year is no exception.”

The Lady Bearcats sent the Lady Toppers packing last season with a 3-0 sweep in the first round to end WKU’s season.

WKU is fresh off of a five-match homestand and riding a four-match winning streak.

The Lady Toppers are taking some momentum with them into the match tonight after their matches over the weekend. They beat Florida International, a top-tier Sun Belt team, on Friday and topped Florida Atlantic on Saturday to extend their winning streak to four matches.

Hudson called the FIU match “the most complete match” WKU has played all season, and others on the team agreed.

Rogers said that the Lady Toppers’ success over the weekend should roll over to tonight’s match.

“Friday was the best we’ve played all season,” she said. “We’re really bringing momentum into that Cincinnati game.”

Junior outside hitter Jordyn Skinner said the Lady Toppers’ focus on improvement has helped them get better offensively and defensively.

“We’re not really worrying about the other side as much as we’re making sure our side is doing what we need to do to win matches,” she said. “We put it all together and played really well this weekend.”

Tuesday’s match is the first road match the Lady Toppers have played since Oct. 1 when they beat Florida Atlantic in Boca Raton, Fla. They’ll be on the road for the next two weeks before returning to Diddle on Oct. 28.

Hudson said the extended time in Bowling Green shouldn’t hurt his team’s performance when they get back on the road.

“It’s nice to have the crowd behind us and all that, but I think our kids have been just fine on the road and I anticipate we’ll continue to be,” he said.

WKU has been just as successful on the road as they have been at home, compiling an 11-1 record outside of Diddle this season.

Rogers said the crowd in Cincinnati is always big, but she hopes the Lady Toppers can feed off of the energy.

“They always have a big fan group, kind of like ours here,” she said. “They’re going to be yelling in our faces and cheering really loud but that’s the best environment to play in and we all love that.”