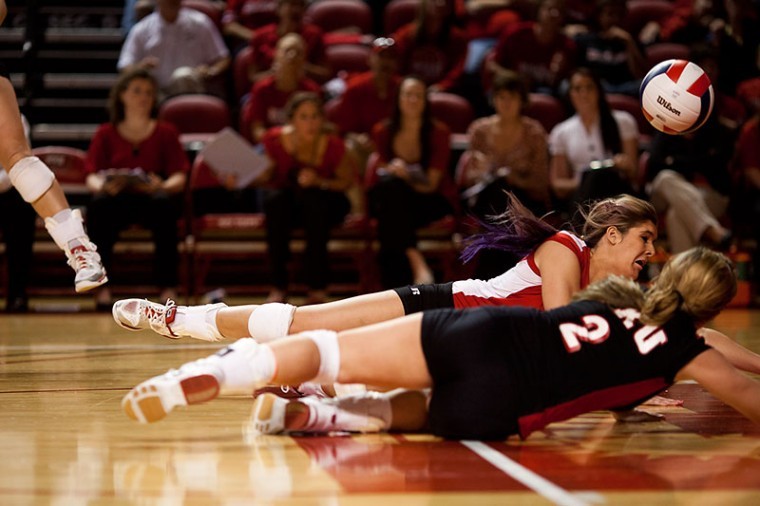 After winning 14 matches in a row the Lady Toppers were due to run out of steam eventually.

They did just that Tuesday night against Middle Tennessee State.

“We knew it was going to be a hotly contested match, and offensively we just didn’t execute as the match went on,” Head Coach Travis Hudson said. “There are certain things that you have to do well against Middle Tennessee and we just didn’t do those things tonight.”

The Lady Toppers won the first set of the night but dropped the next three in front of 1,114 people at Diddle Arena.

The two teams were close on paper until the fourth set, which WKU lost 25-16. Senior middle hitter Tiffany Elmore said the serving and passing were big reasons why the Lady Toppers fell.

“Our passers are really good but they just had an off night. We missed too many serves and we didn’t have enough aces,” Elmore said. “Middle came out and played tonight, and we just couldn’t counteract it.”

“The perplexing thing about tonight is we’re such a good passing team and tonight we did not pass the ball well at all,” he said. “Its something you almost take for a given with our players and tonight it just wasn’t there.”

The Lady Toppers also had a low kill-to-error ratio. They had 50 kills but also recorded 25 errors and ended with a .179 hitting percentage. Elmore was the only player to record a percentage over .250.

Sophomore defensive specialist Ashley Potts recorded a team-leading 14 digs and said WKU would recover before its home matches this weekend against Troy and South Alabama.

“We’re really good at bouncing back so I think we’ll just get back in the gym tomorrow and work on what we do,” she said.

Junior defensive specialist Sarah Rogers said despite the fact that WKU’s winning streak is over, the team will continue to build momentum through Sun Belt season.

“We’re still on a roll. Its just another one in conference,” she said. “We’ve got to think about each game as an individual game and come back ready on Friday for the next one.”

Hudson said he would remain optimistic despite the loss.

“I’m not going to get down on this group,” he said. “We’ve had a heck of a run to this point, and I wasn’t under any grand illusion that we were going to go 30-1 so its just time to get back to work.”