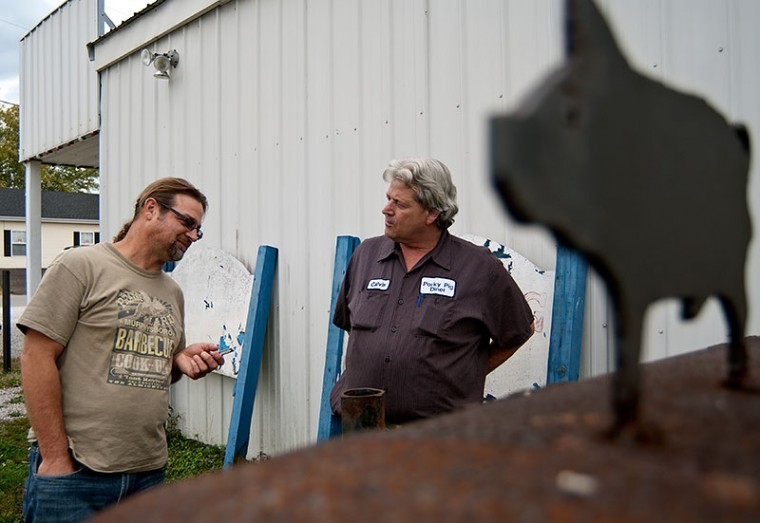 WKU Associate Professor Wes Berry interviews Calvin Durham, owner of Porky Pig Diner, about the cooking setup at his restaurant. Berry is currently in the process of writing a book about different kinds of Kentucky barbecue. He plans to eat at a large amount of barbecue joints by his deadline.

English professor Wes Berry is traveling across the state of Kentucky eating barbecue with one thought in mind.

He wants to make Kentucky famous for its barbecue.

“My home state has been grossly neglected when it comes to barbecue fame,” Berry said. “I watch these food and travel channel shows where they talk about America’s best barbecue and they focus on North Carolina, Memphis, Texas and Kansas City.”

Berry said the lack of recognition Kentucky is getting on barbecue is a “problem.”

Beginning in the summer of 2009, he decided to fix the “problem” by traveling, eating and writing a book on the barbecue he tastes. So far, he has eaten at more than 80 different barbecue joints across the state.

With more than 40 more places to go, he said he still gets excited.

“We have stuff here you can’t get elsewhere, like mutton,” Berry said.

Pulled pork, sliced shoulder, ribs, chicken, brisket and mutton have all been covered in Berry’s book from his various stops, which only include mom-and-pop joints.

Berry’s roots in barbecue go back further than his idea for writing this manuscript.

Growing up in Barren County, Berry’s uncle was an entrepreneur who would “flip meat all day.” When Berry would visit his uncle, he would be given chores to do. His uncle would reward him with smoked meat.

And that’s how Berry defines barbecue as “meat cooked with smoke.”

Barbecue meat can be cooked by burning wood in what is known as a barbecue smoker, or smoke pit. During the smoking process, the pit’s door is closed allowing a dense cloud of smoke to surround and seep into the meat. The heat level of smoking is low and takes time more than 15 to 20 hours.

“I like a real good smoky flavor, tender and juicy with a bit of salt to bring it out,” Berry said, “The biggest crime is to sell old meat, really old meat.”

Berry said he smokes his own barbecue about once a week. English department head Karen Schneider said that Berry has “perfected” the process.

“I will occasionally ask him to make barbecue, but I understand that it’s a long process,” Schneider said.

WKU graduate Todd Chappel from Dawson Springs was given the opportunity to travel with Berry while he tastes barbecue for the book.

Berry’s Kentucky barbecue manuscript has to be submitted to the publisher by January 2012. Berry said he expects the book to be out by May 2013.

Chappel said Berry included the atmosphere and the people of each barbecue stop in his notes.

“It was interesting to see all the detail Wes put in his book,” Chappel said.

Once Berry places his order, he meanders around the room with his voice recorder. He makes sure to describe the menu, the location of the building, the arrangements on the walls and the hours of operation. After eating, Berry will chat with the owner of the restaurant and ask to glance at the barbecue pit.

The two traveled to Mayfield where they went to eight different barbecue joints.

Chappel described the day’s experience in one word: “filling.”